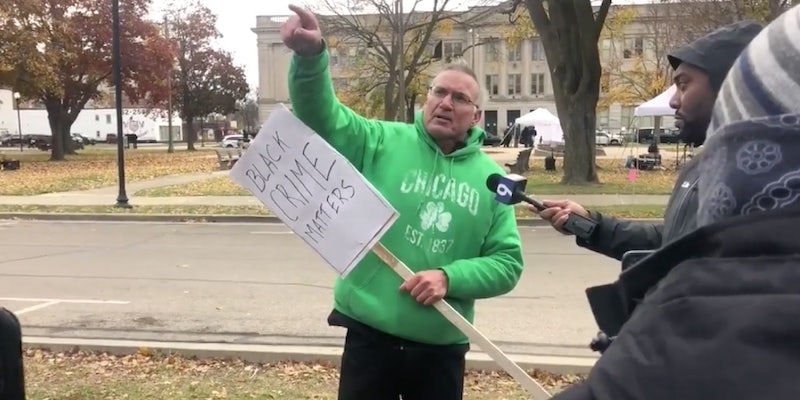 'He really went into it with the hard R.'

Viral video footage shows a white man holding a “Black crime matters” sign and making racist comments outside of the Kenosha County Courthouse as the jury deliberated in the Kyle Rittenhouse trial on Thursday.

Rittenhouse faces multiple charges after he shot three men, killing two of them, during police brutality protests in Kenosha, Wisconsin, last year. The protester told a news reporter why he, as a white man, thinks it’s OK to say the N-word.

The footage, posted to the r/PublicFreakout subreddit by user u/CantStopPoppin, garnered over 300 comments in a few hours.

The video shows the man mid-explanation, as a Black man who appeared to be a WGN-TV reporter held a microphone up to him and a crowd of people watched.

The white man referenced a Richard Pryor album titled That [N-word] Crazy. Pryor, a Black actor and comedian, has two other albums that also use the N-word in their titles. The albums were published in the ‘70s and ‘80s.

The man also said that former boxer Mike Tyson and comedian Dave Chappelle, who are both Black, use the N-word as well.

“Why is it that depending on your race, you can say the word [N-word],” the white man said.

People in the crowd chimed in to explain why, but the white man raised his voice to talk over them, and the commentary became unintelligible.

The man said he heard people saying that if a white person uses the N-word, it’s considered a “weapon.”

“So if you hear the word [N-word] and somebody’s around the corner, do you have to look and see who the person was that said it and find out if it was a weapon and find out if you’re hurt?” the man said. “C’mon!”

The white man then claimed that comedian Bill Cosby said that Black people should stop smacking their kids and calling each other the N-word and [N-word]-fucker.

“Well, because I like to see the process of how the court works,” the man responded. “It’s important for everybody to know how the process works.”

The man then burst into a loud explanation of how he thinks the court works and pointed out the courthouse. “This is the reason the aliens won’t talk to us,” he said.

Viewers on Reddit were appalled at the demonstration. Users cracked jokes about the man’s aliens comment, and one said it was the “uncomfortable” thing they’ve ever watched.

“And he really went into it with the hard r,” one redditor commented.

“He’s just a proud All Amerikkklan man,” another viewer wrote.

Other viewers pointed out that referencing Cosby, who has been convicted of assault, isn’t a good move and doesn’t make saying the N-word any less terrible.

“Invoking Bill Cosby is not going to win you any points,” one person commented.

“When you’re quoting Cosby these days you’ve got to think maaaaaaaybe you’re not making the point you thought you were,” another added.