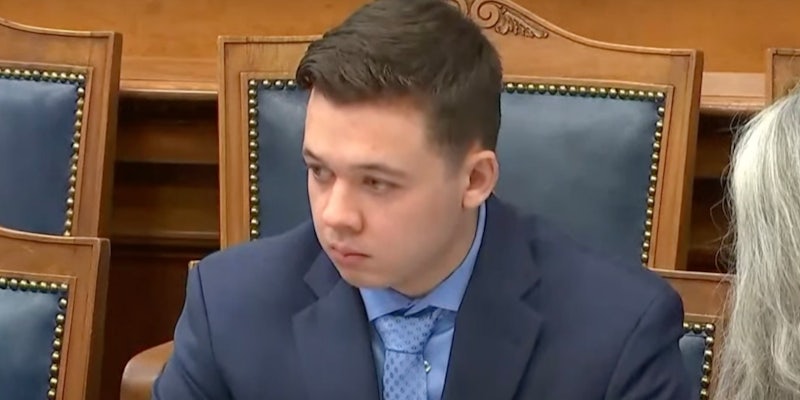 He was in the pool of potential jurors but wasn't selected for the jury.

A man falsely identified as a juror on the Kyle Rittenhouse case is being doxed and threatened.

Rittenhouse is charged with killing two and wounding a third during last summer’s protests over the police shooting of Jacob Blake. Blake was shot seven times in the back in Kenosha, Wisconsin. He was paralyzed.

The nation has been captivated by the case and Rittenhouse has become something of a hero among conservatives.

On Monday, the jury heard closing arguments in the case.

At the same time, a rumor that a juror had inadvertently identified themselves swept across platforms popular with the far-right. People claim that screenshots of an Instagram post and Facebook comments prove that the man is on the jury. (The Daily Dot is not identifying the man or linking to any places where he’s been identified.)

The Instagram post from Nov. 1 is a photo of news trucks. “Big fucking day for this guy,” it’s captioned. Screenshots circulating online include comments on Facebook saying he “sat across a table from Rittenhouse … looking him in the face.”

He told the Daily Dot that someone posed as a juror on 4chan and made it appear like they were him by pasting his replies to people who’d harassed him.

“From what I gather, the person who posed as a juror claimed to be friends with Anthony Huber, and I found comments on other sites stating that Huber and I were friends,” he said via Facebook messenger Monday afternoon. “I had never met Huber.” (Huber is one of the men Rittenhouse killed.)

It seems that the person who posed as a juror was trying to make it appear as if the jury was biased against Rittenhouse.

“Also, this person posing as a juror copy/pasted comments that I had made to people harassing me, making it appear as though I was the person who had posted the thread on 4chan,” the man added.

The man said that his original Instagram post was legitimate and was in the pool of potential jurors, but that he wasn’t selected as a juror or an alternate.

“My Instagram was actually public, and anyone could have grabbed screenshots,” he said.

The defense was delivering its closing arguments while he was corresponding with the Daily Dot. He sent the Daily Dot multiple messages for over an hour. Jurors aren’t allowed to use their phones during court.

“I think it may be safe to assume that I’m not in a courtroom right now,” he said.

The screenshots of the posts made their way onto 4chan, where people joked about following the man home and wondered whether his posts amounted to juror misconduct.

“When do we begin the second phase of generating enough internet furor to ensure this man gets jail time for his misconduct as a juror?” one wrote on the since-deleted thread.

Two Telegram channels menacingly suggested people make sure to remember the man’s name “when the media memory holes this.”

Twitter users also posted the man’s name and claimed he was on Rittenhouse’s jury.

Via Facebook messenger, the man told the Daily Dot that he’s received multiple threats from people who falsely believe he’s on the jury and biased against Rittenhouse. He provided the Daily Dot with a screenshot of a purported threat in which someone used racist and homophobic slurs against him and claimed the judge had been informed of his conduct.

“You better step down peacefully or you’ll be taken out,” the message said.

It concluded, “Kill yourself bitch.”

The man told the Daily Dot, “Oh, I’ve seen it all. Also have received several dozen messages, phone calls, and texts from people either harassing me, or just wanting to know the truth.”

He said that a few people have been supportive. But he just wants this to be over.

“I just want to live my life, keep my head down, and pursue happiness,” he said.