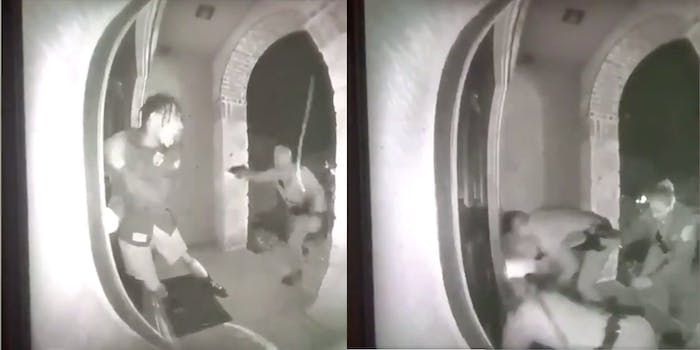 The Schertz Police Department is investigating claims of excessive force.

Officials in Schertz, Texas, released police body camera footage that shows officers tackling an 18-year-old boy and shocking him with a Taser after they chased the teen for running a red light, KENS reports. Schertz Police Department is investigating claims of excessive force.

A doorbell camera captured footage of the arrest of Zekee Rayford, who drove to his father’s house while police officers chased him. In the video, the teen is seen running to the front door yelling for his father just before two police officers run to Rayford and tackle him.

Newly released police body camera footage shows the arrest from the officers’ perspective. The footage shows Rayford’s father at the front door, and an officer says, “You better relax, or you’re gonna get it next. I promise you, you will… Unclench your fist.”

In another video, an officer asks Rayford, “You should have stopped, right?” The teen responds, “Yeah, but it was still unnecessary.”

The videos also captured responses from Rayford’s family members, who expressed concerns for the teen’s safety. One officer warned Rayford’s father after he approached an officer.

According to a statement released to the Daily Dot, Schertz Mayor Ralph Gutierrez said the police department released the footage to be transparent.

“Throughout every situation the City is deeply committed to doing what’s right,” the statement said. “And at this time, the right thing to do is be as transparent as we can, which is why we are releasing this footage.”