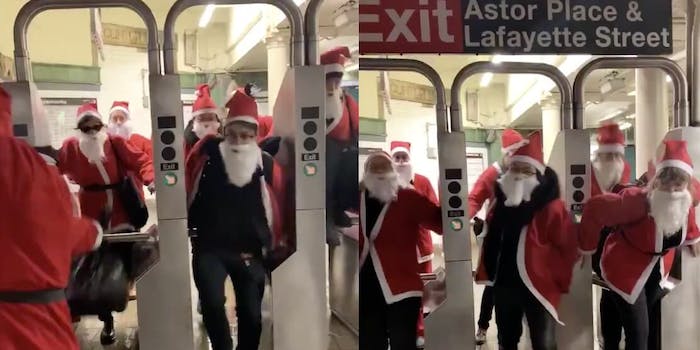 A bunch of Santas jumped subway turnstiles with no consequences

There were no cops in sight.

A video showing a fleet of Santas jumping turnstiles at a New York subway station is raising questions.

Twitter user @solublefischel shared a video showing at least a dozen SantaCon pub crawl participants, who mostly appear to be white, jumping turnstiles at an Astor Place subway station in Manhattan on Saturday.

Damn… SantaCon is lit y'all pic.twitter.com/73xNzLJs7m

A follow-up tweet shows some of the Santas holding doors open for other passengers to enter freely.

A Saturday evening report on CBS New York said police believed “most of the people were on their best behavior” at SantaCon, but two people had been arrested and charged with assault. There was no mention of the turnstile jumping.

The video is touching a nerve for New York residents who have been protesting crackdowns by the New York Police Department on subway fare evaders, which disproportionately affects people of color and poor people. Protests started with the documented attack on Black teenager Adrian Napier, who was hunted down by more than a dozen cops pointing arms at him for jumping the turnstile at a Brooklyn subway station in October. Activists organized protests last month amid other reports, including the arrest of a woman selling churros on a subway platform.

In response to the video of white Santas giddily jumping turnstiles, many who questioned if Black people would be able to do the same with such merriment.

And not one cop to be seen issuing tickets for fare evasion. Meanwhile, a cop tried to break my arm as I walked away after exercising my right to remain silent. White privilege is a hell of a drug. pic.twitter.com/mJVkneANBA

In all Honesty all I see in this video is white people jumping the turnstyle without anybody bothering them and knowing the @NYGovCuomo has Undercover cops on busses in poor black & brown communities giving $100 tickets if people are short .25 cent or selling churros so 👎🏾

I don’t mind fare hoping but if you’re going to arrest black people and churro ladies then arrest them too. Or just let everyone hop. Public transport should be free

— the entire movie the social network from memory (@chesterapricot) December 15, 2019

Bc it was never about not paying the fare. It’s racism

@MTA where are all the cops to stop this or do you and @NYCMayor only care about the poor people who can’t afford to pay and have to do this?? 🤔 and i’m not going to even start about if this was black people. They would have been shot 🤬

@MTA where are all the cops to stop this or do you and @NYCMayor only care about the poor people who can’t afford to pay and have to do this?? 🤔 and i’m not going to even start about if this was black people. They would have been shot 🤬

Where the cops?! Where the tasers?!

Wonder why this not being policed…

where were the HUNDREDS of MTA cops when this happened?

Some said the Santas jumped the turnstiles in solidarity and they should be welcomed by protesters. But journalist Elizabeth Spiers said the actions only reinstate white privilege, not fight it.

“This is a stunt and not helpful. The only thing they’re demonstrating here is that they know they won’t face any real consequences for doing it. It’s a novelty to them. And there are real ways to fight these stupid racist fare evasion arrest policies,” Spiers tweeted.

Fare evasion enforcement overwhelmingly targets poor people and people of color, & you'd think a bunch of people protesting turnstile jumping arrests would understand this, & the optics of demonstrating that they can do it with impunity bc they're a group of white people. But no. https://t.co/lQV2qMAXoS

When reached on Tuesday, MTA did not answer why cops were not made aware of this incident and directed the Daily Dot to the NYPD, which did not respond. SantaCon NYC did not immediately respond to the Daily Dot’s request for comments.