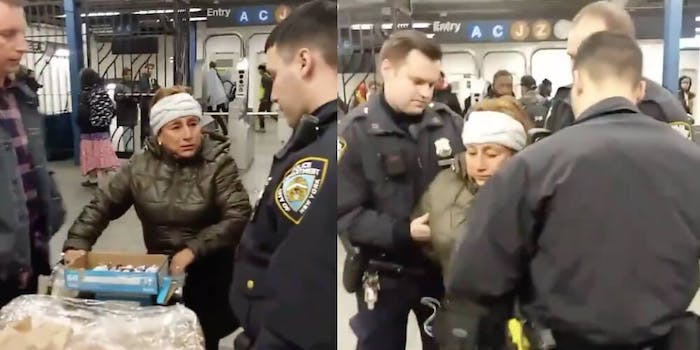 NYPD is facing criticism over the move.

The New York Police Department (NYPD) is facing criticism after a video went viral, showing its officers detaining a churro seller in a Brooklyn subway station.

Sofia Newman posted the two-part video on Twitter in hopes “that someone knows of a way to help” the woman.

In the video, the unnamed woman can be seen crying as Newman questions the three to four officers (one is dressed in civilian clothes) as to why they are “taking her shit away.”

One of the officers tells Newman that “it’s illegal to sell food inside subway stations.”

“We warned her multiple times and she doesn’t want to give it up,” he says.

Tonight as I was leaving Broadway Junction, I saw three or four police officers (one of them was either a plainclothes cop or someone who worked at the station) gathered around a crying woman and her churro cart. Apparently, it's illegal to sell food inside train stations. 1/? pic.twitter.com/sgQVvSHUik

Newman then asks the officer if the woman can go outside and keep her churro cart.

Newman wrote that the officers gave the woman two options: “They were telling her that she could either give them her churro cart and receive a fine (one that she probably wouldn’t have been able to afford), or that they would take her cart and arrest her.”

She wrote that the woman was trying to speak to the officers in Spanish.

“The plainclothes cop kept rolling his eyes and saying things like, ‘Are you done?’ and ‘I know you can speak English,'” Newman wrote. “Eventually, they cuffed her and unceremoniously dragged her and her cart away.”

The woman’s arrest can be seen in the second part of Newman’s video.

“You’re literally doing this right now? Are you fucking kidding me? She’s just trying to sell some stuff. This is fucking ridiculous. She is fucking powerless right now, you assholes,” Newman can be heard saying as the officers are arresting the woman, while one is wheeling her churro cart away.

She kept trying to speak to one of the cops in Spanish, but the plainclothes cop kept rolling his eyes and saying things like, "Are you done?" and "I know you can speak English." Eventually, they cuffed her and unceremoniously dragged her and her cart away. 3/? pic.twitter.com/qVIfN7DO7u

“This individual has been issued 10 summonses in the last five months for unlicensed vending at the same station,” Mason told the newspaper. “She refused to cooperate and was briefly handcuffed. Her property was vouchered as arrest evidence.”

NYPD, along with New York Gov. Andrew Cuomo (D), is now facing criticism over the move.

“This is a churro lady. They’ve been a staple in NYC for years – people get hungry on the commute, and many stations have no food options. This is bullshit, targeting her because she’s brown & poor. Cuomo’s little crackdown is meant to conceal his inaction re *fixing* the subway,” Twitter user @nkjemisin wrote.

This is a churro lady. They've been a staple in NYC for years — people get hungry on the commute, and many stations have no food options. This is bullshit, targeting her because she's brown & poor. Cuomo's little crackdown is meant to conceal his inaction re *fixing* the subway. https://t.co/NXMWioJTmD

This is…absolutely absurd? Either they fine her (which is messed up af) or they take away the cart, which basically takes away her livelihood? Jeez NYC really tryna hit some quota this year https://t.co/kBlaK7Shu2

I don’t know where to begin. The NYPD is forcibly removing Latinx and black folks from public transit for doing nothing wrong.

Slash the NYPD’s budget and get them out of our subway stations.

— Every fare evasion stop is a policy failure (@aaronnarraph) November 9, 2019

In October, another video similarily went viral, showing nearly a dozen NYPD officers pulling guns on a Black teen for fare-beating. In June, Cuomo announced that 500 officers were being added to the subway and bus systems in the name of “public safety.”

The Daily Dot has reached out to NYPD.