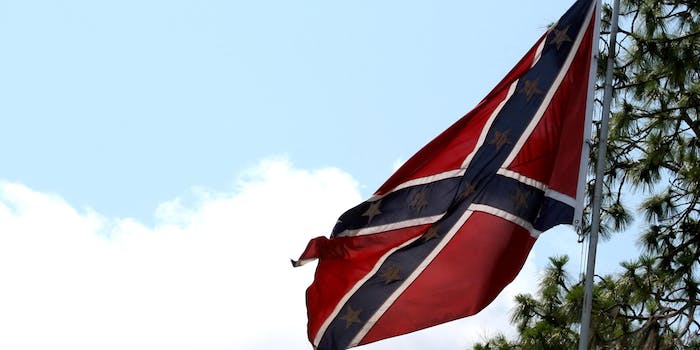 The students posted about the incident on Snapchat.

The same day that LGBTQ+ pride flags were brought on campus in a show of support for classmates, some students at West Plains High School in Missouri displayed a Confederate flag in their lunchroom.

“I noticed two boys get up and they have the Confederate flag, and they’re like showing it to the lunchroom in the senior cafe,” West Plains student Abigail Lipford told local outlet KY3.

On Snapchat, students posted about the Confederate flag in their cafeteria. One of the posts, as reported by BuzzFeed News, read, “If they can fly their queer flags, others can fly their rebel flags. Butthurt?”

BuzzFeed News reported that the school district chose to treat the incident as a “learning experience,” rather than a “disciplinary matter.” The district’s decision and the presence of pride flags on campus have drawn equal criticism from the West Plains community. Some said that the students were “too young” to be concerned with their sexuality and that they should be focusing on their studies.

The students who distributed the pride flags told BuzzFeed News that they intended the flags to be a show of solidarity to LGBTQ+ students. One of these students was 15-year-old Marianne.

“A lot of students don’t have parents who support them,” Marianne told BuzzFeed News. “We were just trying to show that we’re proud of who we are.”

KY3 reported that student Taylor Pool, who according to BuzzFeed News also distributed pride flags, found the presence of the Confederate flag offensive because of its mocking nature and the disconnect between the issues represented by each banner.