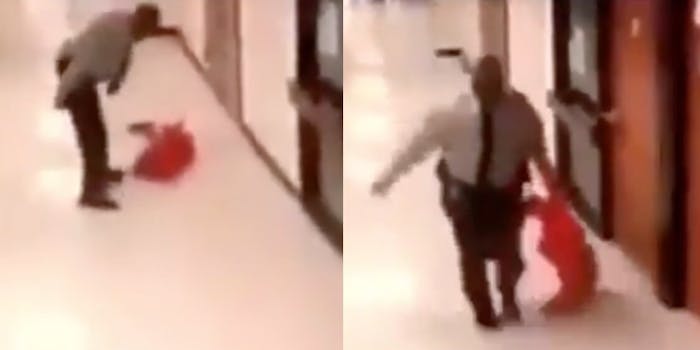 Sheriff fired over video showing him slamming child to ground

The sheriff was fired after online backlash.

A North Carolina sheriff has reportedly been fired after video emerged showing him slamming a child to the ground in the halls of a middle school.

The sheriff was initially placed on paid leave, ABC News reported. Activist Shaun King shared the video on Monday morning and called for him to be fired.

This officer MUST be fired by the end of the day TODAY.
He should then be ARRESTED immediately for felony assault of a child.

This not only violates policy, it violates the law.

The term “paid leave” trended on Twitter in the wake of this announcement, with many saying the brutality of the crime did not match with the consequences the sheriff faced.

“This is terrible policing— especially for a school! For this, paid leave is unacceptable! This is criminal!” one user wrote.

"paid leave," they said. There are some details to be looked into for sure, but what is already settled by this video is the fact that a grown man initiated a violent physical assault against a child. Fire & arrest him, THEN investigate.pic.twitter.com/SmiB8ml6F3

After being the police for 15 years & a School Resource Officer for almost 10, I know it’s a million ways to be positively impactful as a SRO.

Not one is present here!

This is terrible policing— especially for a school! For this, paid leave is unacceptable! This is criminal! https://t.co/8S2aaWUUUq

Another user said that when they called the sheriff’s department, they were hung up on.

“I’m calling to see how your department justifies putting an officer on paid leave after body slamming a child not once but twice?”

They hung up on me. https://t.co/KsFGSysrJN

Within hours of King’s tweet, the sheriff was fired. King announced the update and said there should be a criminal investigation into the incident.

UPDATE: The Officer was just fired.

Thank each of you helping make that happen.

Of course, that’s not enough.

He committed criminal assault against this child and should be arrested immediately. pic.twitter.com/FJ6clPrNtf

The family of the boy is also calling for a criminal investigation into the incident, WRAL.com reported.

“It just made me mad,” John Miles, a pastor and the boy’s grandfather, reportedly said on Monday. “Look at the video. He could have been killed.”

Brame told WRAL.com that the sheriff doesn’t have any prior records and has been with the department for two years. When reached by the Daily Dot on Monday afternoon, the sheriff’s office did not say if criminal charges are being pursued against the sheriff and said North Carolina State Bureau of Investigation, invited by Brame, is handling the investigation.

A spokesperson for the bureau told the Daily Dot that the district attorney will determine what charges, if any, will be pursued after the investigation.