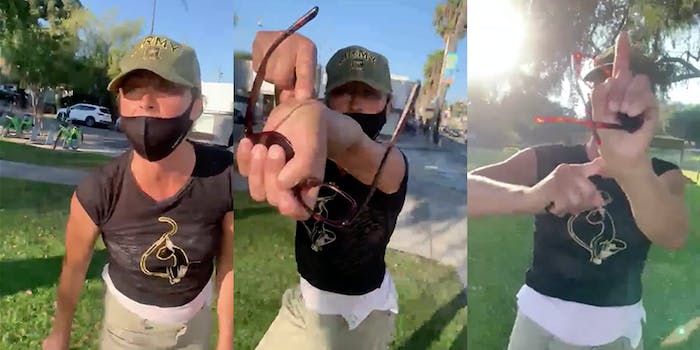 'Who steps on turtles!? What a monster.'

A video recently shared online shows a woman berating a man and his friend after allegedly attempting to step on the friend’s pet turtles. It is unclear what events transpired before the video started, however, the woman is seen yelling at the man and pointing in his face as she aggressively approaches him.

The video, shared to the “Public Freakout” subreddit, begins as the woman can be heard shouting, “You’re lying. You hit me.” She physically knocks the camera away. “You fucking lying son of a bitch,” she continues, as the man and his friend threatens to call the cops.

“You just hit me here. … Does that feel good to you?” she continues, going on to call the men “satanic fucking devils.” She begins insulting one of the men by mocking his accent. “Where are you from? The fucking Middle East?” she shouts.

As the friends continue to say that they’re calling the police, the woman raises her arm and shows a small bleeding mark near her wrist to the camera. “Yeah, that feels good to you. Get away from your turtles? You just hit me,” she carries on. “Fuck you, go to hell fucking liars.” She eventually walks away, only to return with more yelling as the video cuts out.

In response to the video, one Reddit user pointed out that the woman appears to injure herself in the midst of the rant. “I’m sorry but did she attack him, injure herself and then claim that he attacked her? Wow,” they wrote.

“Who steps on turtles!? What a monster,” wrote one Reddit user in response to the incident. Similarly, another user responded with genuine confusion about the woman’s freakout, saying, “I just don’t understand. How can someone act like this and not just be ‘hold up, I’m acting crazy.’”