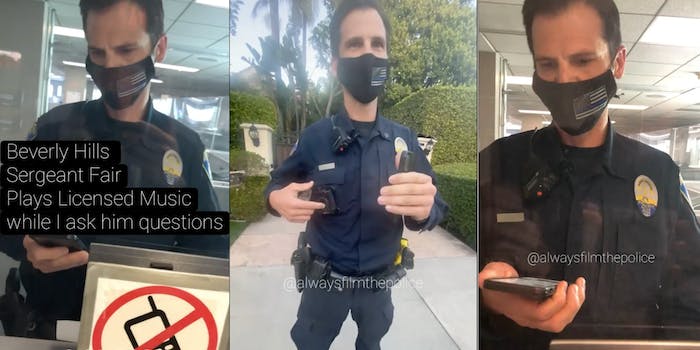 The activist says the officer played music during his live-stream to trigger copyright censors.

In a live stream Friday, a Los Angeles activist recorded a police officer playing music while he requested police forms, apparently in an attempt to trigger copyright censors on Instagram. “It’s outrageous,” the activist wrote.

Sennett Devermont, an activist with over 300,000 Instagram followers, told the Daily Dot that he was “requesting forms to request body cam footage” from the Beverly Hills Police Department when the officer began playing music. He wrote that the officer’s use of music was a deliberate attempt to prevent him from posting the video.

“I believe Sergeant Fair aka BILLY FAIR is using copyrighted music to keep me from being able to play these videos on social media,” Devermont wrote in an Instagram post. “He isn’t alone. I have video of this happening with another officer who played music as I was talking. Is this an order from the top?”

At the beginning of the video, Devermont speaks Sgt. Billy Fair through a glass window in a police station. Fair stares at his phone and plays Sublime’s “Santeria” while Devermont attempts to ask the officer questions.

“Sir, you’re putting on music when I’m trying to talk to you,” Devermont says. “Can you turn that off? It’s a little ridiculous. Can you please turn that off?” The officer’s initial reply is inaudible, but he states that he is trying to see how many people are tuning in.

“I’m just trying to see how many people are watching this,” the officer replies. “You can’t answer my simple question, I’m trying to find it myself.” The officer continues, “Let me go find the answer to your question.” Devermont replies, “That would be ideal.”

In the second half of the video, Devermont records Fair in a different location. Fair tells Devermont that he “couldn’t hear” him before and plays music on his phone again. Devermont steps back and says, “See, you’re doing that again.” Devermont asks Fair why he is playing music, and Fair says he “can’t hear.”

“Then turn down your music,” he says. “That doesn’t make sense, does it? Maybe you should put your body cam on. Maybe the body cam should have been on earlier, we’re in an active crime scene.”

Devermont, who said he has recorded police officers for over 10 years, said he has not “seen any other police do this.”

According to the Preview App, Instagram can mute videos, end live-streams, and remove Instagram posts that contain copyrighted music.

The Beverly Hills Police Department, which did not immediately respond to the Daily Dot’s request for comment, told Vice that the videos are “currently under review.”

“The playing of music while accepting a complaint or answering questions is not a procedure that has been recommended by Beverly Hills Police command staff,” the department wrote.