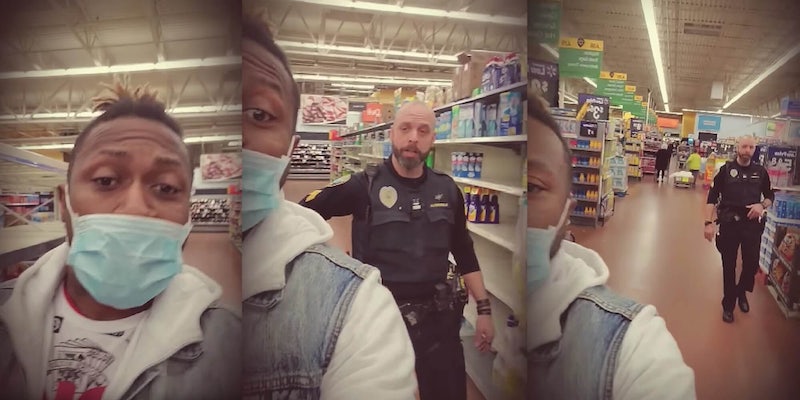 The shoppers said they were wearing the masks for protection from the global pandemic.

A video is circulating of a policeman escorting two Black men out of an Illinois Walmart for wearing face masks during the global pandemic.

When the policeman approached them, one of the men, Jermon Best, began filming the interaction. He later posted the video to YouTube, where it has more than 65,000 views.

“This officer right here behind us just followed us in the store… told us that we cannot wear masks. There’s a presidential order. There’s a state order,” Best said in the video.

The officer allegedly told the shoppers that they were violating a city ordinance that prohibits people from wearing masks inside stores. There’s no such city ordinance, according to a local news outlet the Telegraph.

Although the video has made its rounds on social media, the police chief told the Telegraph that he didn’t want to make a public statement about the incident because the video looked one-sided as it doesn’t show the entire interaction between the officer and the men.

“There’s not much I can say,” the police chief Brad Wells told the Telegraph. “I backed the officer by what he tells me. Just like anything, there’s more to the story.”

“This video will show how even during a pandemic law enforcement is still targeting African Americans,” Best said in the caption of the YouTube video.