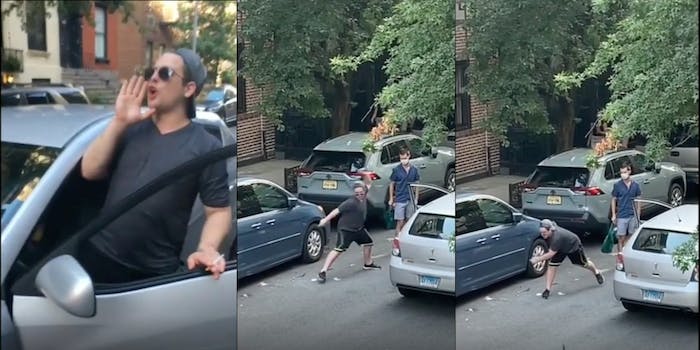 'Another Karen is on the loose and this one is one of the worst!'

A video that surfaced Sunday shows a man yelling the N-word and threatening a bystander before snatching his phone and hurling it across the street, the New York Post reports.

In the video, the driver, who remains unidentified, steps out of his Pontiac in the Upper East Side of New York and yells, “Get out of the street asshole, fucking [N-word].”

“Because you’re an asshole,” the bystander says.

The driver calls the bystander an “asshole” for recording.

“No, you’re not? Well you look like it,” the driver says.

The driver then says, “Before I beat the shit out of you, get out of here,” and the bystander says, “Give it a try.”

The driver then steps out of his vehicle, takes the phone from the bystander’s hand, and throws it across the street.

At the end of the video, the clip includes a long-distance recording of the bystander’s phone being thrown from a higher angle.

The description of the video on YouTube says the driver was “repeatedly shouting at a Black sanitation worker,” which prompted several residents to come down to street level.

New York City Council candidate Anthony Beckford tweeted the video and demanded that the driver be identified and held accountable.

“This and any other act of racism will NOT be tolerated,” Beckford wrote.

The New York Police Department did not immediately respond to the Daily Dot’s request for comment.

Some are calling the driver “Karen” and say he was angry because he was caught being racist.

Another person tweeted, “As a gay, we don’t claim him.”