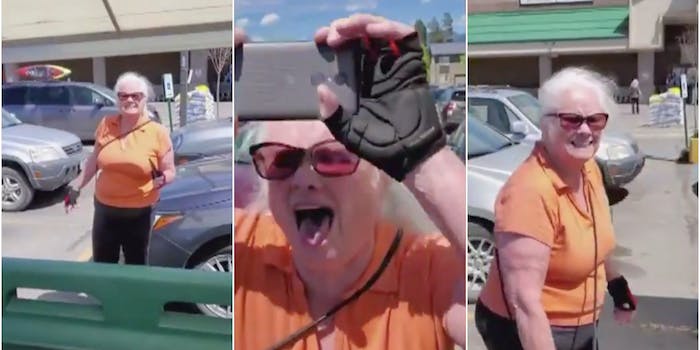 A parking lot showdown in Whitefish, Montana took a nasty turn when a maskless woman allegedly coughed violently on a couple and backed into a man with her car.

The Five-o Media YouTube account uploaded two videos documenting the altercation. (The account owner, who is also the man filming, requested to have his name withheld out of safety concerns.) The incident started inside a Super 1 grocery store, where the man filming claims the woman in front of him in the checkout line berated another woman and argued with her about social distancing.

As this woman—dubbed “Whitefish Karen” by some people on the internet—pays for her groceries, she mutters something about masks to the cashier and calls the man filming her an “ignorant, two-digit-IQ ape.”

The argument spills into the parking lot. Whitefish Karen gets out of her car and asks the couple which car is theirs.

“Is this your car, or don’t you have the balls to tell me?” she says. She then walks up to the man filming her, who asks her to “please get away from me.”

Whitefish Karen then whips out her own phone, hacks exaggeratedly on the couple, and calls the man a “fucking moron.”

Uncowed by his threat, Whitefish Karen replies, “You don’t go to jail for not wearing a mask, you moron.”

Whitefish Karen then gets in her car and tries to leave the parking lot. The man filming stands behind her car in an attempt to stop her. He suddenly drops his phone and yells, “Hey! Watch out!” as Whitefish Karen allegedly backs into him.

The man filming the video said he banged on Whitefish Karen’s rear window when she tried to back into him a second time, breaking the glass. He made this distinction in an attempt to clarify the “false narrative” being spread on social media that he smashed her window simply because she wasn’t wearing a mask.

The man who filmed the altercation tells the Daily Dot he was ticketed for the broken window, and Whitefish Karen was cited for disorderly conduct, with more charges potentially pending. It remains to be seen whether Whitefish Karen’s reign of tyranny will see another day.

Update 9:36am CT, July 21: This story has been updated with additional video and a firsthand account of the altercation from the man who filmed it.