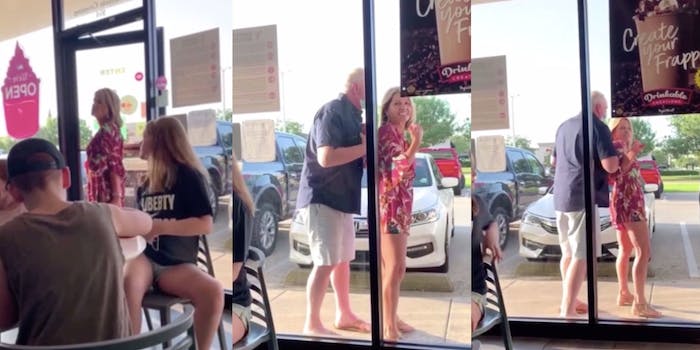 'You look so stupid with your mask on.'

A video showing a woman yelling about masks in a Yogurtland is going viral on Reddit.

In the video, a woman repeatedly tries to enter a Yogurtland without a mask only to be intercepted by a man, who Redditors claim is her husband. The video was posted to Reddit over the weekend.

When the recording starts, it appears that the argument over face masks had already begun. The woman enters the Yogurtland and approaches the register. The man, who Redditors assume to be her husband, appears to be paying for his yogurt.

“Get out! Get out,” he says while pushing her out the front door.

There’s a physical interaction between the man and the woman as they shove each other multiple times at the doorway. The woman then starts to walk away and head toward the parking lot, so the man re-enters the store and apologizes for the woman’s behavior.

But the woman didn’t stay outside for long. As the man turns his back to the door, the woman rushes back into the store. The woman puts her hand on her hip and says she’s only going to stand in the doorway but that she won’t enter. The man continues to tell her to “get out.”

“What are you looking at?” she screams at another customer. “You look so stupid with your mask on.”

The man then physically pushes her out the door––again. This time he follows her out the store, where they continue to push each other. He then holds one of her arms behind her back and shoves her toward the parking lot. At one point, the woman appears to smile as she taps on the glass windows of the store.

In the background, the store employee can be heard apologizing to the customers inside. Three kids in the camera’s view appear to be shocked as they shake their heads.

The video was published to the “public freakout” subreddit. The people in the video have not been identified, and it’s unclear whether the redditor who posted the video was the person who recorded it.