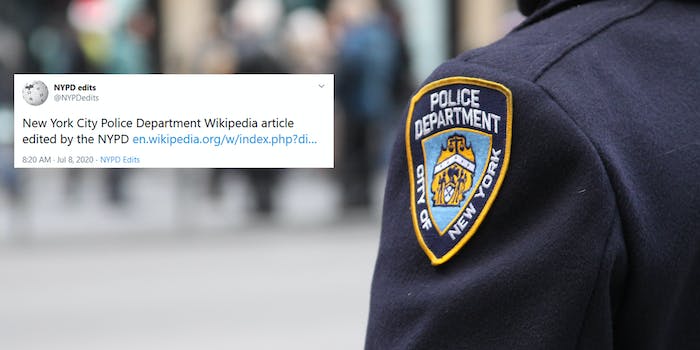 A bot caught the change.

The New York Police Department (NYPD) on Wednesday edited a portion of its Wikipedia page to try and gloss over references to police brutality and misconduct, according to a Twitter account that tracks NYPD changes to Wikipedia articles.

The change was flagged by @NYPDedits, a Twitter bot created by John Emerson, which tracks changes made to the agency’s Wikipedia page from NYPD IP addresses. It is similar to @Congressedits, which does the same for IP addresses in Congress.

Specifically, the NYPD IP address changed a portion of the article that said the department had an “extensive history of police brutality, misconduct, and corruption, as well as discrimination on the basis of race, religion and sexuality.”

That was changed to: “The NYPD has an extensive history of reducing crime in the most diverse city in the country,” along with changes touching on the department’s various programs and initiatives.

The NYPD did not immediately respond to a request for comment by the Daily Dot.

The NYPD’s attempt to clean up its Wikipedia article comes as protests against police brutality and racism have sprung up across the country in the wake of the police killing of George Floyd.

This isn’t the first time NYPD IP addresses have been caught making changes to Wikipedia articles.

In 2015, Capital New York reported IP addresses from the department made changes to articles about Eric Garner, Sean Bell, and Amadou Diallo.

@NYPDedits was created after that report, according to a story about the creation of the bot in 2015.