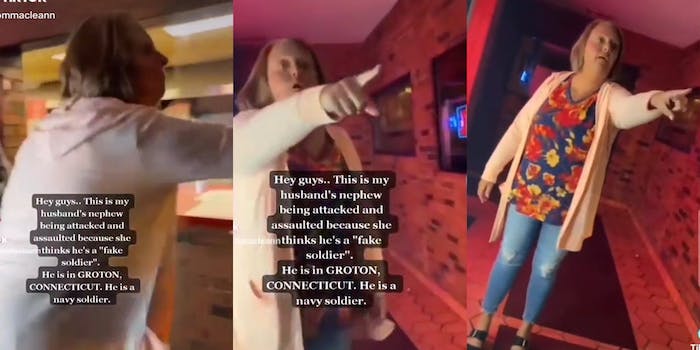 A viral Facebook video of a woman attacking a Navy sailor and accusing him of wearing a fake uniform has viewers coming to his defense.

Sean Nolte Jr. shared his story of the incident on Facebook, saying that he stopped off-base to grab pizza with a friend on Sept. 11 when a woman came in and started staring at him.

He says after she went in and out of the pizzeria several times, the woman returned and started yelling at the staff that she knows Nolte is “a fake” because her husband is in the Army.

“I proceed to attempt to prove that I am not a fake, even pulled out my VALID Military ID and showed it to her,” Nolte wrote. “She kept claiming that my Military ID is fake, and proceeds to show me her DEPENDENT MILITARY ID, and screams ‘This is what your ID should look like.’”

The sailor says he stopped trying to convince her after that and asked her to thank her husband for his service. But his attempts to de-escalate didn’t work, and the woman continued to harass him.

“This is disgusting!” she yells in the video, appearing to throw something at Nolte and then hit him. He’s slightly off-screen during the altercation, he wrote on Facebook that the woman also slapped his face.

The friend filming the scene warns the woman that she’s on camera and asks her to leave Nolte alone. Instead, she yells at Nolte, “You disgrace the USA … fucking piece of shit.”

The woman continues ranting at Nolte and his friend but finally leaves, still hurling obscenities, as the sailor jumps on the phone and tries to contact his chief.

The video has resulted in an outpouring of support for Nolte across Facebook and TikTok, where the clip has more than 1 million views. Commenters expressed how appalled they were at the woman’s behavior.

“The restraint and incredible calm this young man displayed. Wow. We’re lucky to have him represent us,” wrote @lucia711s.

“I wish I could see her reaction when she realizes he’s legit,” added @kayjanellle.

“QAnon and racism have poisoned these Boomer’s minds,” a viewer wrote on Nolte’s Facebook post. “Embarrassed for our country.”

According to @mommacleann, who shared the video to TikTok and says Nolte is her husband’s nephew, a report was made to police about the incident.