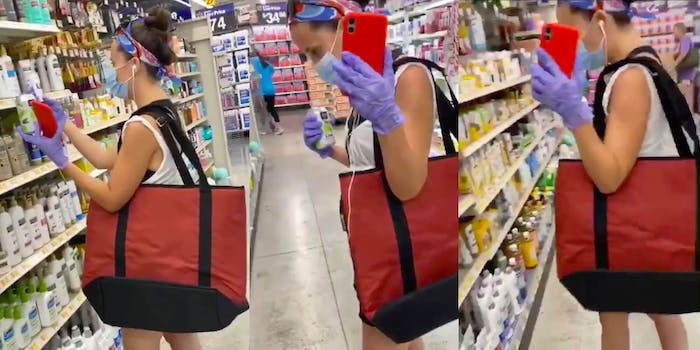 Video shows Walmart Karen calling Black women ‘animals,’ saying ‘this is why they get shot’

She sarcastically says 'Black Lives Matter' to taunt the women.

A video is going viral of a woman unleashing a racist tirade at two Black women at a Walmart.

In the video, which has over 3 million views, “Karen” calls the two women “animals” and claims they “want to get killed.”

It’s unclear how the argument began, but the video starts with Karen, who has yet to be identified, saying she should call the “detail cop who is actually working to pay bills, instead of on welfare.” The woman who is recording tells her to “go ask them, b*tch!”

Karen continues to taunt the women by sarcastically saying “Black Lives Matter,” as she peruses through the products on the shelves.

“This is why they get shot and killed—because this is how they act,” Karen says. “Look at this Donald Trump, they’re animals.” The two women subject to her racist rant sigh in disbelief and repeatedly say, “Oh lord!”

One of the women can be heard in the background saying, “We in the store, and they called us N-word.” The video was posted by @saditysabrina_, who claims to be a friend of the recorder.

The replies are filled with people saying the two women should have beat Karen up. But one Twitter user, @Kir_ran, pointed out that because two women are Black, it could have “ended very badly for them.”

“Black women don’t have the privilege to react emotionally to situations, especially in America. It can be the difference between life and death,” @Kir_ran wrote.