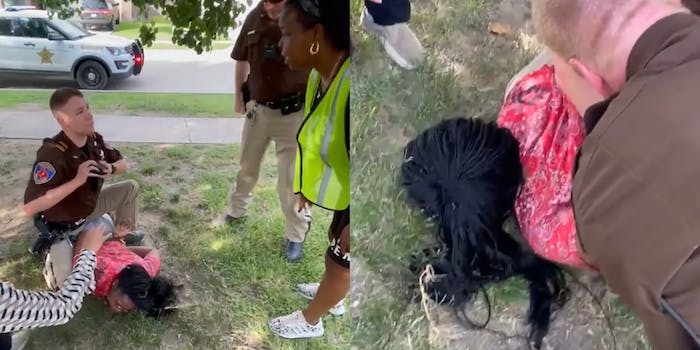 The officer involved has been put on administrative leave.

The video became another touchpoint for police officers’ handling of mental health crises.

According to TMZ, Trigg’s attorney Kim T. Cole said that the teen and her mom, Antanique Ray, along with other family members left their house after the incident, “fearing retaliation” from locals and police.

Cole told TMZ a civil rights lawsuit on Trigg’s behalf against Kaufman County and Martin is in the works. On July 27, during a mental health response, Martin wound up straddled her, holding up her arms down above her head “as she cried, saying she couldn’t breathe.”

The report from Kaufman County claims the “top mount” technique was necessary “to prevent the female from running into traffic.” The video, though, shows Martin instantly pressured the young woman.

After Martin makes physical contact with her, Trigg tells Martin that she is OK, denies walking into traffic, and tells him she wants to go home. Trigg is visibly fearful, and Martin tells her she is not in danger.

Regarding the death threats, it also appears that Kaufman County has struck fear into Trigg and her family. TMZ reports, “They have a general fear of the Kaufman County Sheriff’s deputies after prior experiences close family friends have had with them.”

The outlet was also told that Trigg fears her mom could face jail time over the incident. KREA News reports that Martin has been put on administrative leave.