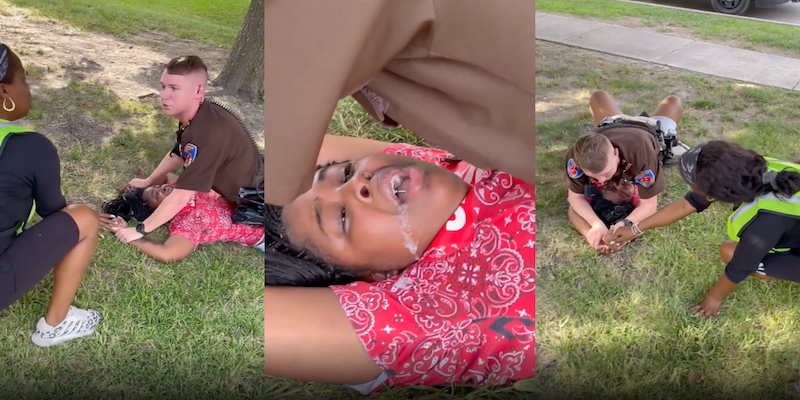 A video of a Texas sheriff’s deputy lying on top of 18-year-old Nekia Trigg after police were called to the scene is sparking outrage.

A woman made a 911 call on July 27 in Forney, Texas, after almost hitting Trigg, who was supposedly walking into traffic at the time.

“There’s a young lady, an African American lady, that is walking in the middle of the street,” the woman tells the 911 dispatcher. “I almost ran her over and she said that she wants to be run over.” The woman said Trigg was crying hysterically.

Body camera footage from Deputy Conner Martin of the Kaufman County Sheriff’s Office was released and shows him walking up to Trigg.

Trigg tells Martin that she is OK as she walks away and wipes tears from her face. She denies walking into traffic and tells him she wants to go home after Martin says to slow down and talk to him.

Trigg is visibly scared, even as Martin tells her she is not in trouble.

“You can’t go walking off, OK,” Martin says, firmly holding one of Trigg’s arms as she tries to walk away. Trigg’s crying becomes increasingly hysterical.

“Don’t hurt me,” Trigg cries repeatedly. “I don’t want you to hurt me.” Trigg calls her sister on the phone as Martin tells her to stop pulling away. “You’re hurting me already. The police is hurting me,” Trigg says.

Trigg continues to pull her arm away from Martin’s grip. After repeated attempts to ask Trigg to sit down, the two appear to get into a brief scuffle, and Martin’s body camera falls to the ground beneath Trigg.

A video taken by a family member’s friend arriving with Trigg’s sister and mom to the scene shows Martin lying on top of Trigg with his hands on her wrists held above her head.

The Kaufman County Sheriff’s Office referred to Martin’s hold as a “top mount commonly used in Ju Jit Su” in its news release of the incident. It also said it “allows the deputy to control the lower body without impeding breathing.” A top mount involves sitting on a person’s torso, restricting the person by the ground and the person on top.

The news release also states “the family encircled Deputy Martin, screaming and threatening him,” but the video simply shows the family members trying to calm Trigg down and telling her to breathe.

“It’s 102 degrees out here,” Trigg’s mom, Antanique Ray, tells Martin. “Look at her mouth. She’s literally foaming from her mouth.” Ray puts her hand on her daughter’s hand while Martin is still on top of her and later asks why his body camera was not on him while he was on top of her.

Martin and another deputy then handcuff Trigg and escort her to a vehicle. Ray asks why Trigg has to be handcuffed and for the officer to loosen them. In an attempt to comfort her daughter, Ray touches Trigg’s arms, which Martin and other officers react to quickly by pushing Ray’s arms away and holding up a taser. Ray is then handcuffed and charged with assault on a public servant and interference with public duties.

“I touched my daughter when she said they were too tight,” Ray says while being handcuffed. “I did not touch you.”

Trigg’s family members, who are filming, take count of the number of officers arriving on the scene.

People online were divided between those who praised Martin’s “professionalism” and those outraged by his alleged deescalation techniques.

“Thank you for saving this young girl’s life,” one Facebook user commented. “I hope she gets the help she needs in the facility.” Another social media user who had initially been upset after watching the video said they changed their mind.

“At first, I was extremely outraged by how this was handled,” they wrote. “While I absolutely still agree he needs a refresher course on restraining, I don’t believe this officer is in the wrong … The officer was so calm. He was trying.”

However, others claimed the video tells a different story of the trauma surrounding law enforcement that BIPOC individuals face. According to a 2018 study, police killings of unarmed Black Americans triggered days of poor mental health over the following three months.

One user called the “entire” news release “BS.” “The world watched that video and nobody threatened that officer. That technique was definitely impeding her breathing and he wasn’t just holding her hands. He rested his body on her before it was brought to his attention that she couldn’t breath and was foaming at the mouth … They couldn’t have watched the same video that we watched,” they alleged.

Another viewer said while they saw that the officer approached Trigg with care, he quickly crossed the line with physical contact.

“She did nothing criminal!” the viewer wrote. “This is where law enforcement needs counselors on staff to address these types of issues. To end in an arrest is wrong. Many of you will not see it like this because you probably never had to deal with this, but this young lady has a natural fear of law enforcement, just like many of us!”

According to the Kaufman County Sheriff’s Office’s news release, Trigg was taken to a mental health facility for evaluation, and Martin was placed on administrative leave pending an investigation.

Update 8:41am CT, Aug. 3: When reached for comment, the Kaufman County Sheriff’s Office told the Daily Dot that “there is no new information at this time in regards” to the investigation.

“The Kaufman County Sheriff’s Office remains committed to transparency and cooperation with our community. Any complaints against this department is taken with the seriousness it deserves and will be followed with a complete and thorough investigation,” it added.