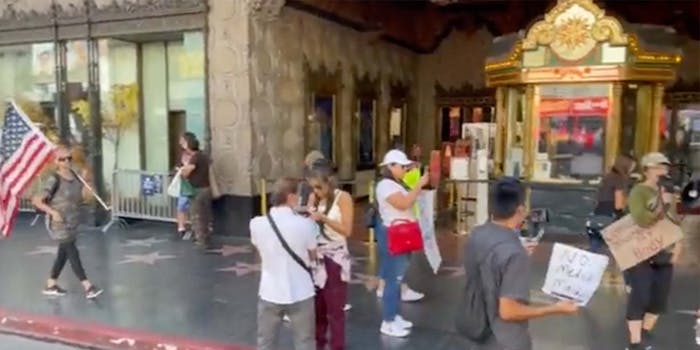 An unhoused man 'basically did a mic drop.'

In a video posted on Twitter by @FilmthePoliceLA on Tuesday, an anti-vax protester shouts that because people experiencing homelessness aren’t “dead in the street with COVID,” vaccines are useless.

“Because I’m vaccinated you dumb fuck,” shouts a man who is walking by. He’s apparently experiencing homelessness and offended by the protester’s statement.

The Twitter user said the video was taken on Sunday on Hollywood Boulevard in Los Angeles and reposted on Reddit by u/asianj1m. @FilmthePoliceLA tweeted that the man’s name is Ray. They also posted a video of Ray confirming that he was the one who said “because I’m vaccinated you dumb fuck.”

@FilmthePoliceLA followed up their video of Ray saying they would be creating a GoFundMe on his behalf. Twitter users enthusiastically responded to the videos of the man.

“Ray basically did a mic drop,” tweeted @imirishjoe. “He did it right.”

Although Ray has restored many Twitter users’ faith in humanity, the effort to vaccinate LA’s unhoused population has been complicated.

LAist reported in April that giving people experiencing homelessness cellphones has made a huge difference in ensuring that they return to receive their second vaccination. (@FilmthePoliceLA tweeted that Ray said he plans to get a cellphone once he has acquired an ID).

Similarly, a Department of Health Services of LA County report from March states that it has “achieved an average 75% success rate in giving persons experiencing homelessness their second dose of COVID-19 vaccine.”

That said, Los Angeles magazine clarified in July that the percentages of people experiencing homelessness that have received their first (41.5%) and second (31.6%) dose of the vaccine were “well below countywide numbers for the general population.”

“The vaccination rate has started to slow across the board, but also among the unhoused,” the magazine reported.

Commenters on Reddit called out the anti-vax protesters for assuming that people experiencing homelessness aren’t vaccinated.

“Homeless people are the ones proactive in taking the vaccine since they have no homes to go to,” commented u/BelRexion. “They were the ones in the biggest risk of being infected besides health and regular workers.”

“She’s not homeless but very stupid,” another redditor commented about the anti-vax protester.