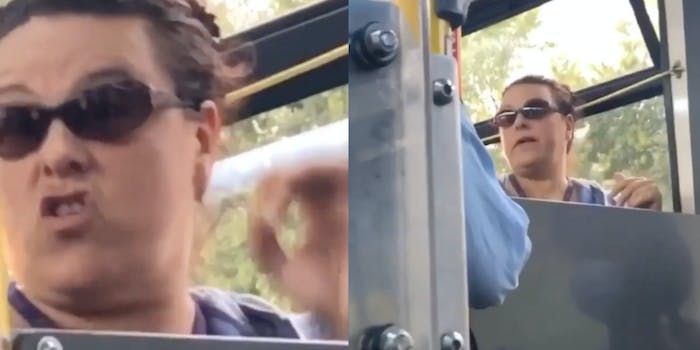 Anti-masker thinks she’s entitled to berate bus driver all because she has a Ph.D.

'I have a Ph.D. What do you do?' she says before shoving the driver in the video.

An angry passenger berated and shoved a bus driver in Canada after being asked to wear a mask.

The footage, which was filmed in Ontario last month but only recently surfaced on social media, shows the bus stopped as the driver attempts to get the unidentified woman to cover her face.

“You’re moving around, and people are wearing masks,” the driver says. “You don’t have a mask.”

The woman responds by noting that she wore a mask while getting on the bus before insulting the driver.

As the situation intensifies, the driver ultimately asks the woman to get off the bus. The passenger responds by getting up from her seat and shoving the driver.

Instagram users who viewed the video, unsurprisingly, sided with the driver.

Although the video ends shortly after, London Transit Commission (LTC) General Manager Kelly Paleczny revealed in a statement to CBC that the police was called soon after.

The woman has since been charged with one count of assault. The driver was reportedly not injured during the attack.

Paleczny also noted that LTC drivers have been told not to attempt to enforce its mask rule on passengers.

The video is just one of many that have surfaced since the coronavirus pandemic began in which individuals have been assaulted over mask disputes.