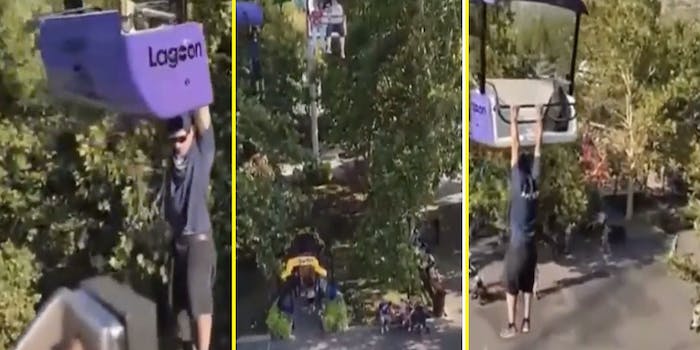 Man was filmed clinging to amusement park ride before his death

'Last night, I was not able to sleep thinking about that man.'

A man critically injured falling from a ride at an Utah amusement park on Saturday died of his injuries Monday—and another visitor to the park captured the man on video as he dangled from one of the cars.

The video, filmed by park visitor Lucy Grace Astilla, was taken at Lagoon Amusement Park in Farmington, Utah. The video, shared by Spanish-language news outlet Somos Utah, showed the man outside a car on the park’s Sky Ride attraction, hanging from the guardrail.

The Gephardt Daily, reporting on the story, noted that the 32-year-old, whose name was not released by the Farmington Police spokesperson who addressed media, “fell or jumped an estimated 50 feet” and sustained critical injuries in the fall.

Astilla was reportedly headed the other direction on the two-way Sky Ride when she spotted the man and began filming. “I thought it was a stunt, or he is a gymnast practicing for American Ninja Warrior, rehearsing, but then I noticed he didn’t have any equipment that would save him from a fall,” she said, according to the Gephardt Daily‘s reporting.

As she told Fox 13 for its coverage, she’s troubled by what she captured on her phone.

The Gephardt Daily account noted that Astilla called out to the ride operator to stop the ride to help the man hanging from the car.

“And that’s the time we heard screaming from other people, but we were by the roller coaster, so I think maybe it was for that, but it wasn’t,” she said. “The screaming was because the man fell.”

“Last night, I was not able to sleep thinking about that man,” she added on Saturday night as the man’s life hung in the balance at University of Utah Hospital. “I pray for him. I hope he can recover.”

The amusement park’s social media team addressed the incident in a Facebook post on Sunday morning. It read, “We are saddened by an unfortunate incident that occurred on the sky ride yesterday. Our hearts go out to the family and others associated.”

Adam Leishman, a spokesperson for the park reached by the Daily Dot via email, repeated the statement in the Facebook post and added, “The incident is under investigation by local authorities and Lagoon is cooperating with that investigation. The Sky Ride has been operating without incident since its installation in 1974 and there is no indication that the ride malfunctioned. Lagoon was given authorization by authorities to reopen the ride Sunday.”

Leishman later added that “authorities took statements from many, many eye witnesses” and that the park is “waiting for them to give us a full accounting of their discoveries.”

“They did, however, state that this was not a malfunction of the ride or the individual ride carrier,” Leishman said.