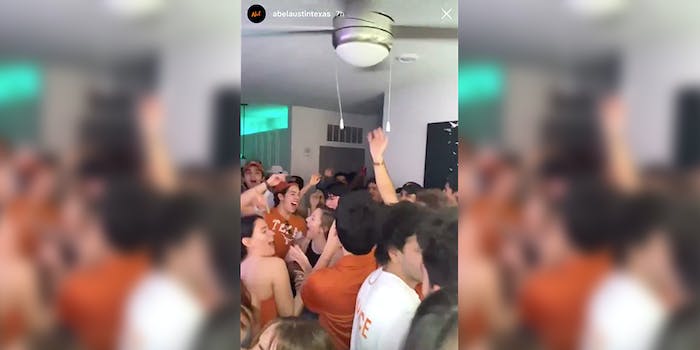 The university has seen over 1,300 positive tests since March.

As college campuses nationwide continue to grapple with the realities of life in a pandemic, a recently surfaced video showing University of Texas at Austin students ignoring social distancing has drawn backlash.

On Saturday, the school’s football team faced Oklahoma University in its annual rivalry game. Students gathered en masse to celebrate the event via tailgates and day parties, one of which was captured on video and shared on social media.

The video shows dozens of students packed tightly into an apartment as they dance to Icona Pop’s “I Love It,” posted with the caption “UT students when you tell them there’s a pandemic going on.” There are no masks to be seen in the clip.

The game also sparked a series of other memes, as well as causing students to voice their takes on how the university may be mishandling the pandemic.

A group of spring breakers from UT Austin were previously pinned by the Centers for Disease Control and Prevention as the source of a massive COVID-19 outbreak during the onset of the pandemic.

The video surfaced just days following the university’s announcement that a second staff member had died after contracting COVID-19, according to campus newspaper the Daily Texan, causing further concern about accountability from administration.

In a statement to the campus community, university President Jay Hertzell said that the staff member would not be named in order to uphold privacy for family and friends, but that they had worked as a utilities and energy management employee on campus for a decade.

“It is vital that we remain as vigilant as ever in our commitment to mask wearing, social distancing, proactive community testing and all other measures related to combatting this disease,” Hartzell said in a statement. “There can be no letup — until there is a vaccine, we have to protect our own health and that of others, particularly those most vulnerable.”

According to the school’s most recent testing data pull, accurate as of Oct. 10, the university has seen 1,381 positive tests since March 1.