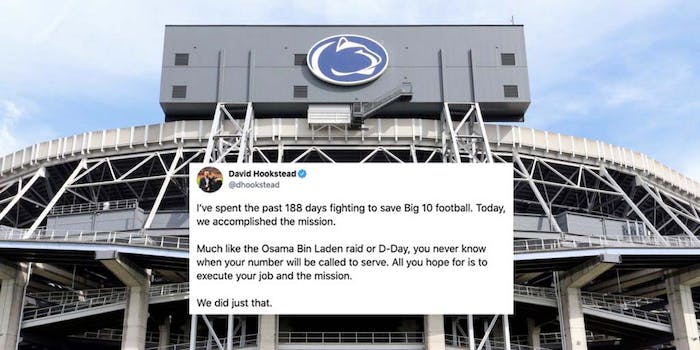 Sports fans had a reason to celebrate today, as Big Ten conference presidents and chancellors voted to start college football season on Oct. 24. The decision was taken under serious consideration but ultimately was given the green light mostly due to advances in medical information and resources regarding coronavirus.

Though it must be great to have even small concessions such as college football to remind us of pre-pandemic life, it’s also important to take things in stride, as COVID-19 is still very much an ongoing threat. Daily Caller college football writer David Hookstead evidently missed this memo, however, when he celebrated on Wednesday with a tweet comparing the return of Big Ten football—which he credits himself in part for saving—with uh, the Normandy landings and killing of Osama Bin Laden.

“I’ve spent the past 188 days fighting to save Big 10 football. Today, we accomplished the mission,” Hookstead wrote in the tone-deaf tweet. “Much like the Osama Bin Laden raid or D-Day, you never know when your number will be called to serve. All you hope for is to execute your job and the mission.”

“We did just that,” he emphasized, self-importantly.

Putting something as trivial as college football on the same scale as notable events in world history is egregious in the first place. But when you factor in the very much ongoing global pandemic that’s killed nearly 200,000 Americans and counting—well, it’s a near loss for words.

Of course, the key word here is “near,” as Hookstead’s tweet got ratioed quickly. “You spent 188 days working to get people killed, alright,” scorched one user. “But that’s the only fair part of your comparison.”

Between the terrible analogy and Hookstead literally celebrating college football players putting their lives on the line for our entertainment, others had plenty of thoughts.

If only COVID-19 could be cured or treated with bad takes, we’d all be through this by now.