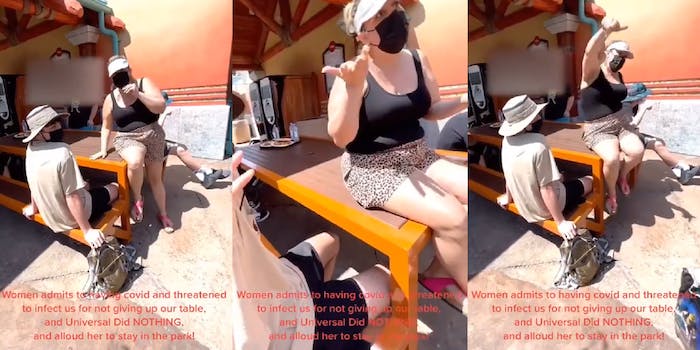 'You’re getting my COVID worked up.'

The young Canadians who boasted on camera about flouting COVID-19 protocols as they traveled through various airports now have competition for worst tourists ever, as a new video shows a woman—dubbed a “Karen” by some social media users—at Universal Studios threatening to “spread her COVID” on a boy who took her seat.

The video, shared by Twitter user Marjorie Gaylor Queen (@Tim_Tweeted) and uploaded to YouTube by Galaxy Views on Sunday, appears to be ripped from a TikTok, though there is no username visible. It is unclear when exactly the video was filmed.

The text overlaying the video reads, “Women [sic] admits to having covid and threatened to infect us for not giving up our table, and Universal Did NOTHING, and alloud [sic] her to stay in the park!”

In the video, a woman is sitting at a table and arguing with a boy seated at the bench. The person filming, presumably, the boy’s mother, asks, “Are they calling security?”

“Go ahead call security before I take off my mask and spread it on you,” Universal Studios Karen says. “You know my saliva can [come off] your mask.” (It seems like she meant to say her saliva could get through the boy’s mask if she removed hers.)

“Get out of my table now,” she continues. “I asked you politely. When my food comes I want you to leave.”

The boy holds his ground, telling the woman, “No, I told you nicely that I’m sitting here.”

“And I told you nicely I’m having food here,” the woman retorts.

“I’m sorry about that. That’s not my problem,” the boy tells her.

“It’s not my problem then, unless you want to get COVID,” the woman says, again threatening to infect the boy and his family.

This back-and-forth lasts for a few more volleys until finally, the boy starts roasting the woman. “I’m not leaving. You’re out of breath right now,” he says. “You’re doing way too much. You’re just messing with yourself right now.”

The woman, by now whipped into a frenzy, tells the boy, “You’re getting my COVID worked up. You’re gonna get me really ill.”

“I don’t understand how people don’t stay at home when they have covid it’s so disgusting to willfully try and make people sick with something they could die from and she probably doesn’t even care,” LoudEmoPsychic commented on YouTube.

Others questioned how this woman’s behavior squared with Universal Studios’ commitment to guest safety.

“@UniStudios So this is acceptable behavior in your parks? Looks like it’s not safe to attend,” @izzysaks tweeted.

Universal Studios did not immediately respond to the Daily Dot’s request for comment.