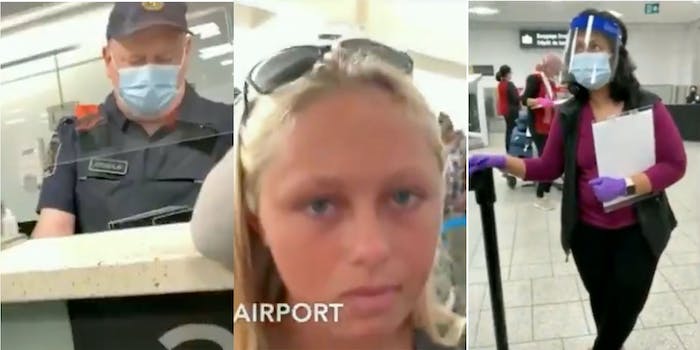 'The parents of those kids must be awful.'

A video shared by the Fifty Shades of Whey account on Twitter shows young Canadian travelers flouting its country’s COVID-19 quarantine protocols while professing to “encourage choice for people.”

The video is narrated by a young female who claims to have traveled from the Dominican Republic to Toronto by way of North Carolina without wearing a mask.

The Fifty Shades of Whey account manager titled the video, “Narcissists travel while refusing to wear masks, take a COVID test, or quarantine.”

A follow-up tweet read, “These super-spreaders were last seen flying from Dominican Republic to North Carolina to Toronto without a shred of human decency. They could be carriers of a new variant. This bullshit is why hundreds of thousands of people are dead.”

She continued, “I went through three different airports with no mask on, and not one single person told me to put a mask on. This is my experience of traveling back into Canada, hopefully giving people the knowledge to start living their life again.”

The video chronicles her and her travel companion’s interactions with officials at the airport.

One is trying to clarify that they have a hotel in which they’ll be quarantining following their overseas trip; she maintains, “We are going to go home to a home that is empty and we’re going to quarantine for 14 days.”

The official informs them, “That’s not how it works.”

Another is trying to have them take a COVID-19 test; they refuse, citing a provision in the law.

“Under Section 14.1 of the Quarantine Act,” she says, “you are not allowed to put anything foreign in our body.” She also maintains that she was tested in the Dominican Republic and is going straight home.

The public official notes their refusal, but tells them there’s a fine that goes along with refusing to take a COVID-19 test.

The video ends with the travelers in their car in Toronto, saying they’ve finally made it back, but that they’re “pissed off” about the situation. It then flashes messages reading “Just say no” and “Just live your life!”

Respondents on Twitter reacting to the video were aghast.

One noted, “The parents of those kids must be awful.”

A Canadian on Twitter asked, “Why are no authorities in the airport enforcing mask-wearing?” and then after a bit of back and forth, registered embarrassment that they were Canadian like her.

Though quite a few people expressed disgust with the travelers, some also worried about what it will mean having people like that moving through airports (and, presumably, other public spaces) in this fashion.

As one person on Twitter assessed, “Here’s the reason we’re going to have a fourth surge.”