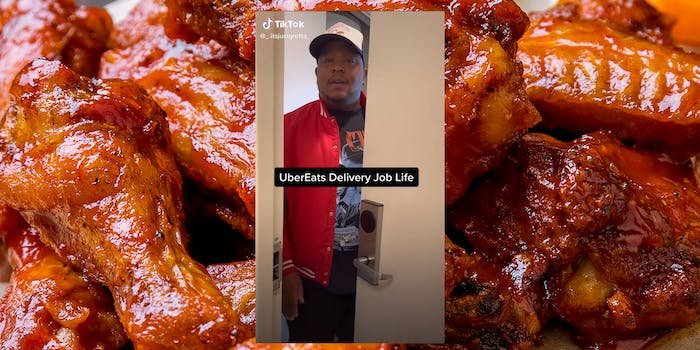 UberEats driver allegedly delivers order to wrong person, then demands money from them in viral TikTok

‘SHE SHOULD HAVE PAID MORE ATTENTION.'

In a viral TikTok video, an UberEats driver demands money from a man whom she allegedly accidentally gave another customer’s order to.

“It was an honest mistake, sir. All I need is the order back. The food or the money,” user @_.itsjustgretta_ says.

The video shows her recording the man at his door while she requests the money or the order back.

“I cannot afford to pay for this. This is not my fault. You knew you didn’t order the food, and you took it,” she says.

She even threatens to call the police if he doesn’t comply.

“If I show this video to the police then it’s gonna be you. You’re the one that’s gonna be at fault here,” she says.

Despite the man’s constant denial, the UberEats driver continues to demand either the money or the order back.

She then calls him out for allegedly acting more calm than he was before, because she started filming him.

“Now you want to act all innocent because I’m filming you,” she says.

With over 20,100 views, the TikTok sparked debate in the comments over who was in the wrong.

Some users insisted it was the UberEats driver’s fault for delivering the order to the wrong door in the first place.

“As an Uber eat driver. It’s completely her fault,” one user said.

Many said that both parties were at fault in this situation.

“All yall saying its her fault he’s still in the wrong,” one user said.

“Y’all both in the wrong tho,” another said.

“They’re both in the wrong, but he already opened the wings, She can’t give it to the customer now,” a third wrote.

Another user repeated this sentiment, asking the UberEats driver what the use would be of the remainder of the order if the man had eaten some of it.

“What you gonna do with the remainder of the order,” they questioned.

Some users offered suggestions to avoid this situation, including taking a photo of delivered orders and calling UberEats support.

“The easiest way to avoid the situation is take pictures video of where you drop off the location with the date and time and send it to Uber,” one user said.

The Daily Dot reached out to user @_.itsjustgretta_ via a TikTok comment and UberEats via email.