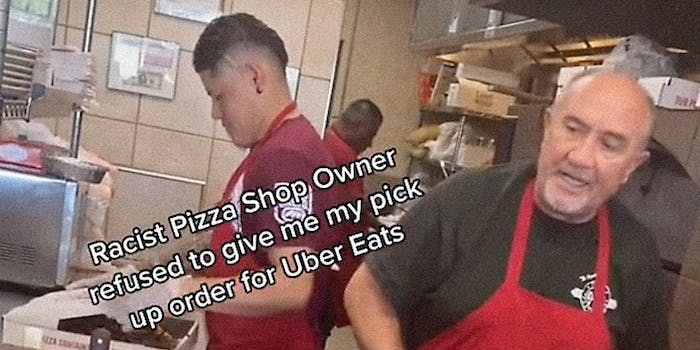 'The workers just stood aside and laughed.'

An Uber Eats driver who doubles as a TikToker accused the owner of a Dallas-area pizza shop of racism, capturing him in a video refusing to hand over pizza she was supposed to deliver.

The video in question comes from the TikTok account of @stopscrollingimtalking00. It was posted to the site on Sept. 18, getting a little more than 45,000 views to date. The TikToker identified the restaurant as Joe’s Pizza Pasta & Subs, putting its full address in an on-screen caption. “Discrimination is still at an all time high,” she wrote in the caption of the video.

The creator appeared to be having a dispute about whether the man behind the counter, whom she identified as “Racist Pizza Shop Owner,” would close the pizza box before handing it over to her.

The creator alleges toward the start of the video, “He started cussing at me for no reason,” and the video shows the owner asking the delivery driver, “You got no hands? Your hands not tight?” The owner perhaps meant, with that statement, that he felt she was capable of closing a pizza box herself.

As he takes the pizza out of her reach toward the back of the store, the creator notes, “You can’t have anybody else pick it up, sir.”

The owner then tells her not to come back into the store again, and as she leaves, the text-to-speech effect notes, “The workers just stood aside and laughed.”

A number of commenters sided with the creator, with one person using the info the TikToker gave in the caption to leave a Google review of the business. “I’m very sorry that happened to you, Queen. No one of color should give him a dime of their money.”

Another person utilized the info as well on her behalf, saying, “Girl I called and placed a pick up order that I’m not picking up.”

But a number of people also criticized the TikToker and let that be known. “This woman is the reason our society is so fucked up,” someone opined, sympathizing with the owner as a “poor, hard working man.”

“He didn’t say one thing about RACE,” another said.

“What makes it racist?” another questioned.

And another TikToker, who claims to be related to the pizza shop owner, defended him, saying: “My uncle is not racist, he’s a great family man and has a great heart!”

The Daily Dot has reached out to both the restaurant owner and the TikToker for comment.