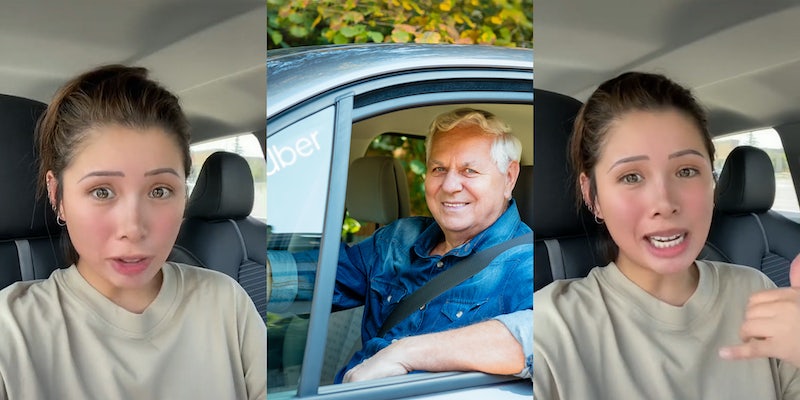 ‘Never be nice to them if you don’t feel comfy’: Woman claims her Uber driver texted her repeatedly following her ride, then showed up at her apartment

'He didn’t give me any red flags because he was giving me, like, grandpa vibes.'

A woman’s Uber horror story went viral this week after she posted a video sharing her experience to TikTok.

In her now-viral video, user @cvillainnn shares her Uber experience, which starts with a driver checking in on her with apparently innocent intent—and ends with him demanding to be let into her apartment.

User @cvillainnn’s story begins when she was getting her COVID vaccination far away from where she lived, as it was the only available location with vaccines at the time.

She called an Uber, and when she arrived at her destination, the driver claimed that there were very few available Ubers in the area. Because of this, he offered to wait for her to receive her vaccine and drive her back, with the two exchanging numbers to ease the process.

“I thought it made sense, and I agreed, and he didn’t give me any red flags because he was giving me, like, grandpa vibes because he was a really old man,” @cvillainnn explains.

However, @cvillainnn soon got a bad feeling about the situation. While she was waiting for potential vaccine side effects, the Uber driver knocked on the door to check in on her, which made @cvillainnn slightly uncomfortable. She then says that she got a “chill down [her] back” as she returned home, with the driver making comments that she regarded as inappropriate.

Once she got home, she says she “thought that was the end of it.” But a few days later, her Uber driver began texting her, first to check in on her vaccine recovery, then incessantly.

“He started to text me periodically, like day after day…and I never responded,” the TikToker shares.

Two weeks later, @cvillainnn says she was visiting her parents when she got a call from her Uber driver.

Eventually, the creator reached the concierge of her building and told them not to let the Uber driver in. @cvillainnn then reveals that the police had to be called to remove the man.

“I submitted a report to Uber, and I never heard from that driver again,” her video concludes.

In the comments section, several users shared their own Uber stories.

“My uber driver kept hitting on me, asking for my number, looking at me up and down, kept asking to take me out. Had to tell him I was 17,” one commenter shared.

“An Uber driver sent me a dozen roses and somehow located my work email and would email me there. I have NO idea how,” another claimed.

“I was leaving the bars in vegas to go home and my uber driver asked if i lived alone,” a third detailed. “Thankfully i live in a gated area with security guards.”

“There’s a lawsuit going around for situations like this!” another added. “I was proposed to in an uber on my way to an interview and he wouldn’t let me out of the car.”

Uber has several current and former lawsuits on the topic of sexual harassment and assault. In one of these cases, over 80 individual cases are being merged into one, with each case alleging a range of sexual transgressions.

Others in comments shared tips for feeling safer in Ubers.

“I always lie in Ubers. Most of the time I put in headphones even if I’m not listening to music because I just don’t want to chat,” one viewer claimed.

“That’s why I use a different name on my Uber profile and have them drop me off a few apartment buildings down,” a second noted.

We’ve reached out to @cvillainnn via TikTok comment and Uber via email.

Update 2:41pm CT, June 11: In an email to Daily Dot, Uber pointed to its policy on post-trip contact for drivers. It reads: “Contact should end when the trip or delivery is complete, unless it’s to return a lost item. Unwanted contact can be seen as harassment and includes, for example, texting, calling, social media contact, visiting, or trying to visit someone in person after a trip or delivery has been completed. Do not share any unnecessary contact information.”