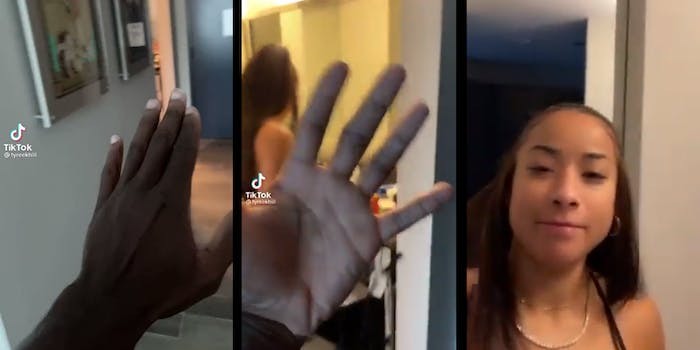 The Super Bowl-winning receiver comes under fire for tone-deaf gag.

NFL star Tyreek Hill has been at the heart of two domestic violence reports since his days in college. This week, the Super Bowl-winning receiver was blasted online for, critics say, laughing them off on TikTok.

The video shows Hill pretending to repeatedly slap a woman in a TikTok he uploaded Monday, with laughing emoji reportedly in the caption. It’s set to a Kung fu-style sound effect. The Kansas City Chief is reportedly dating Keeta Vaccaro, sister of NFL player Kenny Vaccaro, and she appears to be the woman in Hill’s TikTok, the New York Post notes.

“He’s an unrepentant domestic abuser who is shielded from meaningful consequences because he’s good at sports, and he knows it,” tweeted @ryan_merical. “[D]oes he just not give a shit about being a domestic abuser whose talent has caused people to fight for his job and forgiveness?” added ESPN’s @SarahSpain.

Keeta Vaccaro tweeted “I find it hard to distinguish between if it’s a Sacrifice for the better good or if it’s time to close the chapter and open a new one” late Monday and hasn’t tweeted since. But recent Instagram Stories from the past day show her working out and apparently in good spirits. She appears in Hill’s most recent TikTok from a day ago, a comedy skit.

In 2014, while at Oklahoma State University, Hill was accused of choking his 8-months-pregnant girlfriend Crystal Espinal and punching her in the stomach. He was charged with felony domestic assault and battery by strangulation, eventually pleading guilty to the charges and receiving probation.

Selected by the Chiefs because of his athletic profile with a low-value draft pick in 2016, Hill pledged to “be a better man” and “let God do the rest,” per the Sporting News. In 2019, Hill was briefly suspended by the Chiefs amid a child abuse investigation after his 3-year-old son broke his arm. Espinal, then Hill’s fiancée, leaked audio where Hill seemed to incriminate himself in his son’s injury. But with no formal charges, the NFL did not suspend Hill, who maintains his innocence.

The NFL said the audio “did not rise to a level of warranting discipline under the personal conduct policy.” It’s unlikely that Hill’s deleted TikTok runs afoul of said policy either.