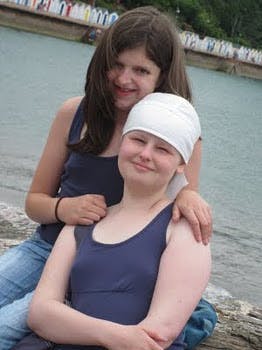 Wishes can come true on Twitter—even those never made.

This holiday season, Twitter is working together to make a terminally ill teen’s dream come true. The only problem is: she never asked for it.

After 15-year-old Alice Pyne, a British teen with terminal lymphoma, discovered she didn’t have much time left, she decided to write a bucket list and begin checking things off. Among her goals: to swim with sharks (check), to get an iPad with a purple cover (check)—and get every eligible person in the United Kingdom on the bone marrow registry.

One thing that was absent from her bucket list: getting her own trending topic. However, that fact hasn’t stopped do-gooder Twitter users from making #AliceBucketList trend not once, but twice.

Tens of thousands of people, apparently under the impression that this was a sick girl’s most ardent dream, retweeted the hashtag this summer, creating a global trending topic by June 10. All this was despite the fact that Pyne’s wasn’t even on Twitter yet.

Pyne joined Twitter the day #AliceBucketList became a global trend because somebody told her to check it out. A few days later she discovered the topic originated from a Facebook page of the same name, which purports to be affiliated with Pyne. When Pyne and her family asked to take control of the page, however, the Facebook page organizer refused.

“please like my fb page ‘Alice Pyne’ and NOT (alice pyne bucket list) which some unknown is running, won’t hand over and we have no control,” she tweeted.

This week, the topic is trending a second time. Twitter users, caught up in the spirit of holiday charity, are retweeting it again. However, a few watchdogs have spotted the redundancy.

The repetition has gotten some Twitter users to wonder if #AliceBucketList is a hoax. While Pyne herself is real, she officially verified on her latest blog post that she never asked for a trending topic.

“I’ve never trended (and seen it) so it would be fun and it would make more people think about bone marrow donation so I don’t think it’s a bad thing.”