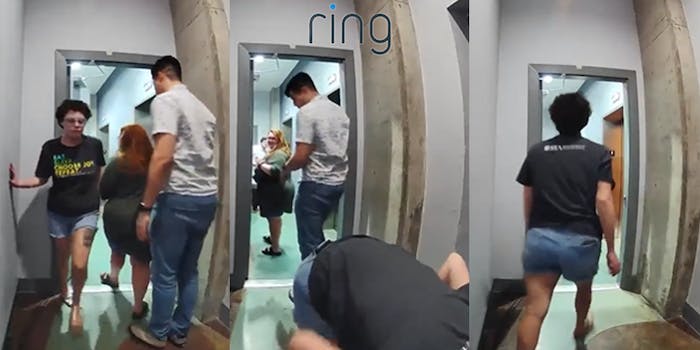 ‘This is for the white lady with the thick glasses, uneven haircut, and dusty shorts’: Twitter user leaves note for neighbor who touches her packages in viral thread

'It’s IMPOSSIBLE for anyone to think MY packages are theirs.'

A user on Twitter recently went viral after sharing a series of interactions with her nosy neighbor recorded on her Ring doorbell.

According to Twitter user Doyenne (@iamnyosha), she only began to notice the woman touching her packages after installing the Ring doorbell.

In later tweets, she clarified that there is no chance that the woman could be mistaking the package for her own as “packages have never been misplaced at [her] door,” the area is low-traffic, and she has a package delivery service that drops her packages off at a specific time that she chooses.

“It’s IMPOSSIBLE for anyone to think MY packages are theirs,” she wrote in a tweet.

Nonetheless, her nosy neighbor took it upon herself to investigate every package that came to Doyenne’s door—that is, until Doyenne decided to do something about it.

In the first video, Doyenne said it was the first time that she observed the woman mess with her packages, though other instances soon followed, even though she was aware she was being recorded.

After observing the woman mess with her packages on multiple occasions, Doyenne decided to do something about it, placing a note on her door to discourage the woman’s behavior.

“This is for the white lady with the thick glasses, uneven haircut, and dusty shorts,” the note starts. “Stop tampering, reading, and touching my packages. Sincerely, fuck around and find out.”

While the woman did not see the note for some time, the message’s content and tone inspired several amused reactions from neighbors.

Eventually, the woman saw the note, leading to stunned silence.

“I think she was too embarrassed to react,” Doyenne wrote. “She has the same hairstyle, shorts and glasses.”

Apparently, the note was enough to stop the behavior, as Doyenne claimed that the next time the lady walked by her door, she did not mess with her packages like usual.

On Twitter, some users supported Doyenne in her quest against the mysterious package tamperer.

“These reactions are hilarious,” one user wrote. “I believe everyone has had some experience with a mf messing with their packages, so I know ppl genuinely understand and support the note lmao.”

“You the goat,” another added. “nah notes really do work though.”

However, many took the opposing view, claiming that despite Doyenne’s explanation of her package delivery situation, there might be a perfectly legitimate reason for her neighbor’s behavior.

“I can’t help but wonder if she may have a disorder. I had a friend with slight autism, wear the same under shirt, had this habit of NEEDING to check a certain post for NO REASON. Just felt like she “had to” or something bad would happen,” one Twitter user claimed. “Its weird but i cant help but wonder.”

“Honestly feel like you doing the most and causing problems…she didn’t touch them she is simply looking at the name…she never grabbed your packages or anything lol,” a second user wrote. “do read [too] much into things the world isn’t out to get you lol.”