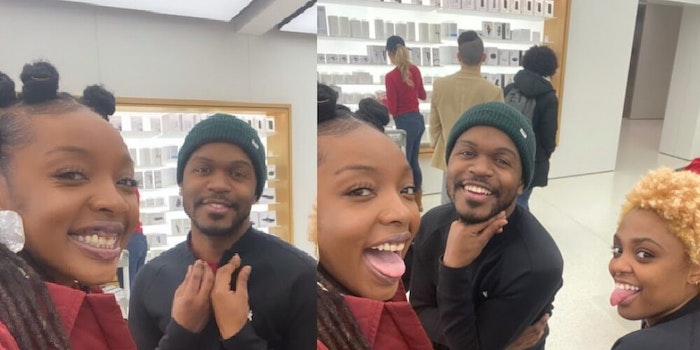 'Sent you enough for the MacBook Air. Keep hustling.'

A man bought a stranger a laptop after finding out that she had been writing school essays on her phone–and Twitter users are getting emotional about it.

Twitter user @Bekhari wrote about how she finished her last semester of college with no laptop. She later detailed that in order to turn in her essays, she wrote them on her phone and then would go to school before class and edit and print them out.

“I really survived my last semester with absolutely no laptop,” she tweeted. “I wrote all of my papers on my phone which was annoying as heck.”

A day after she tweeted this, Twitter user @FranchiseJSmith asked her if she still needed a computer. When she said yes, he sent her $1,099, enough to buy a MacBook Air.

Sent you enough for the MacBook Air. Keep hustling. pic.twitter.com/1Vght0dTMr

Everyone was emotional about the exchange.

The most beautiful thing I’ve seen on twitter. Much respect @FranchiseJSmith pic.twitter.com/KQsJPTfHsS

My eyes getting misty going through your page 🥺 this really, really made my day https://t.co/l7tSJMOThO

Twitter user @Bekhari also responded to the gift, explaining how much it meant to her. During college, she attended school full time and worked a 40-hour job. She added that she also had a part-time job doing hair. Balancing her work and school was difficult, she said, but she recently graduated and finished her theater performance degree.

“I’m overwhelmed today. A lot of emotions going on. But just know I was a college dropout for 3 years due to lack of financial aid, and I just came back this year to finish up my senior year,” she wrote. “The blessings are pouring.”

She later tweeted pictures of her at the Apple store, writing that she would have her laptop up and running by Friday.