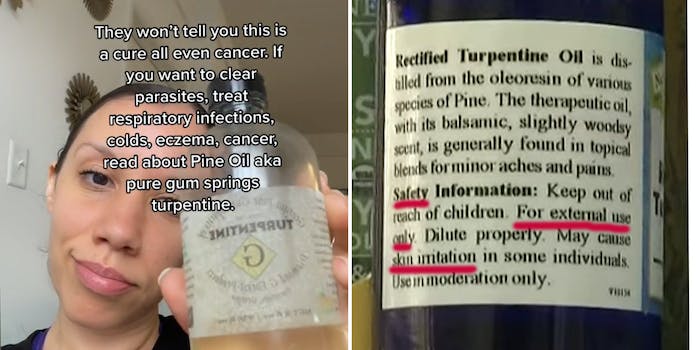 ‘I’ll buy anything TikTok tells me to’: A TikTok ‘nurse’ is pushing turpentine cures—don’t be fooled

'People will believe anything on the internet.'

A woman on TikTok is claiming that turpentine oil is a cure-all—yes, even for cancer. There’s a lot wrong with this claim, but first, the initial viral videos should be investigated.

The most highly viewed video from user Amanda Meri (@thegutnurse) has over 1.9 million views and shows her brandishing a bottle of turpentine. Meri claims to be a registered nurse based in Virginia on TikTok, but according to the Virginia Department of Health Professions, there’s no licensed nurse in Virginia under the name Amanda Milisits Meri, nor has there been in the past 22 years. The Daily Dot did find a nursing license under her name in D.C., which expired in 2018.

“They won’t tell you this is a cure all even cancer,” she writes in the text overlaying the video. “If you want to clear parasites, treat respiratory infections, colds, eczema, cancer, read about Pine Oil aka pure gum springs turpentine.”

In another video, she provides advice on how to consume turpentine, encouraging users to start with “one drop a day” and make sure they buy “food grade turpentine.”

This video also reveals that Meri got her idea to use turpentine from Jennifer Daniels, who has written extensively and given interviews detailing the claim that turpentine has medical uses beyond what is commonly understood in modern medicine.

In 2004, Daniels had her medical license for the state of New York revoked for three years, later surrendering it and moving to Panama, according to the Center for Inquiry. In 2021, Daniels appeared on a podcast denying that COVID-19 has caused any deaths.

Despite her shaky history in the medical field, Daniels’ words on the topic of turpentine have proven influential, evidently to the point of virality.

Returning to Meri’s videos, there are many issues with the claim that turpentine is a cure-all.

First, Meri repeatedly insists that TikTokers purchase “food grade turpentine.” However, the bottle that Meri holds up in several videos, produced by Diamond G Forest Products, makes no claim of being “food grade.” In fact, the bottle she’s holding specifically warns against consumption. The bottle reads that the intended use of the product is as a “solvent for removing paints and waxes.” In one ingests the turpentine, the bottle tells them to “seek professional assistance.”

Even with this statement acknowledged, many advocates for turpentine use will claim that ingestion is safe. They will also say that ingesting turpentine was a common folk cure in ancient history.

For example, a 1972 study treated tumors in guinea pigs with turpentine. The study found that “the turpentine-induced inflammatory reaction at the tumor site was also ineffective in suppressing tumor growth.”

Furthermore, there is no peer-reviewed scientific data to support the idea that ingesting turpentine in any capacity will reduce tumor size or “cure cancer.” As a 2002 summary of the toxicology literature stated, “turpentine failed to act as an anticarcinogen in either of the two studies identified.”

In her video, Meri also says turpentine will “clear parasites.” It is unclear what parasites she is referring to here, but there is also no peer-reviewed scientific evidence to support the idea that a self-regulated regimen of turpentine will clear the body of parasites, especially if those parasites are merely suspected and not confirmed by a doctor.

The summary of toxicology literature also notes that turpentine is not an effective cough suppressant, as many advocates of its use claim. Instead, it can cause cough. According to the National Toxicology Program, inhalation can bring about “an irritation of the mucus membranes of the nose and upper respiratory tract, cough, bronchial inflammation, salivation, headache, dizziness, labored breathing, nausea, and unconsciousness.”

As Dr. Keith Roach writes on the topic in the Detroit News, “Turpentine is ineffective for any medical indication I know, and it is quite toxic… Disease-causing parasites are uncommon in the U.S. and Canada, and should be diagnosed and treated by a medical professional.”

Meri’s other references also fall short. While turpentine has been used in the modern-day to treat eczema in limited cases, many working with turpentine outside of those limited cases have noted that it can actually cause dermatitis.

This is not to say that turpentine has no applications today—it is still a powerful solvent, and in a heavily distilled form, it can be used as a flavoring agent or add a pleasant smell to creams or rubs. It may also have medicinal uses beyond current scientific understanding. However, there are zero medical consensuses that turpentine has the benefits that Meri and others say it has—and plenty of proof that it can do more harm than good.

While death is possible from consuming over a teaspoon of turpentine, consuming a tiny amount is not likely to kill you, according to Alfred Aleguas, managing director of the Florida Poison Center in Tampa.

Still, “turpentine is poisonous if swallowed,” wrote the Delaware Health and Social Services Division of Public Health. It also noted that exposure or ingestion can cause “headache, dizziness and vomiting,” later adding that “breathing or swallowing [turpentine] also causes kidney and bladder irritation.”

As Nicolette Pace, a registered dietitian, told CBS News, “the adverse effects and or fatalities are clearly going to outweigh any potential benefit.”

Update April 15, 2:27pm CT: This story has been updated to reflect that Amanda Milisits Meri has a background in nursing but is not currently listed as a licensed registered nurse on the Virginia Department of Health Professions’ site.