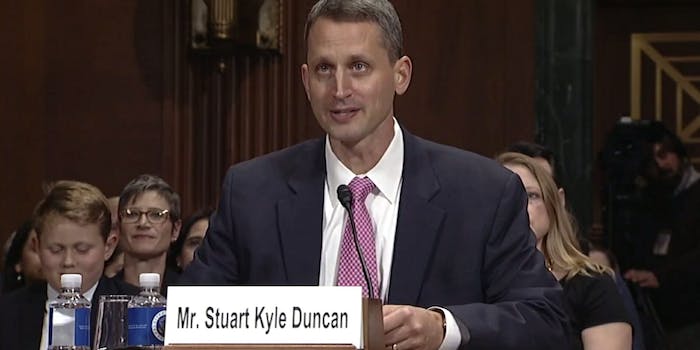 Kyle Duncan has represented some of the most prominent anti-LGBTQ clients in recent history.

On Wednesday, the U.S. Senate confirmed Stuart Kyle Duncan by a 50-47 vote, letting Duncan advance to the U.S. Circuit Court of Appeals in the Fifth Circuit. The vote was largely divided along party lines, with only one Democrat, West Virginia Senator Joe Manchin, voting in favor for Duncan, the Washington Times reports.

The Hobby Lobby case wasn’t an anomaly; Duncan’s resume includes some of the most prominent and wide-reaching anti-LGBTQ cases in recent U.S. history. He represented the Gloucester County School Board against student Gavin Grimm, a transgender teen who sued his school board’s sex-based segregated bathroom policy. He also served as lead counsel for the North Carolina General Assembly on HB2, defending one of the U.S.’s most notorious anti-transgender “bathroom bills,” which forced transgender people to use restrooms in government buildings based on their sex assigned at birth.

Duncan even fought back against gay marriage by writing an amicus brief arguing that the Supreme Court’s ruling to recognize gay marriages should not apply to states with a ban on same-sex marriage. Prior to Duncan’s confirmation, the Human Rights Campaign criticized Duncan in a press release, calling him “unfit to serve.”

“Americans deserve judges we can trust to apply our laws faithfully and administer equal justice under those laws,” Human Rights Campaign Government Affairs Director David Stacy said. “Kyle Duncan is an extremist whose career of attacks on LGBTQ people makes clear he is incapable of this fundamental responsibility.”

“It is the charge of federal courts, and its judges, to serve as the guardian of civil rights for all Americans,” NAACP President and CEO Derrick Johnson warned in an official letter. “Kyle Duncan’s long record of hostility to civil rights protections across the board demonstrates that he lacks the fundamental qualities necessary for dispensing justice in a fair and impartial manner.”