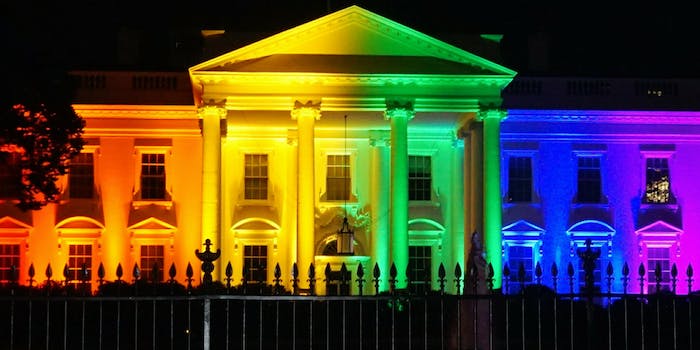 For the second year in a row, President Donald Trump has failed to recognize the month of June as LGBTQ Pride Month. And though his critics are unsurprised, they’re none too pleased with his silence, either.

This year has been no different, as Insider has pointed out. For the second year in a row, the White House has refused to make a declaration.

This isn’t the first time a president has refused to recognize Pride Month while in office. While former President Bill Clinton first recognized the designation in 2000, President George W. Bush did not designate the month during his presidency. The Obama administration reimplemented the designation during both terms.

Throughout this first week of June, Trump’s critics have celebrated Pride Month themselves by calling out his failure to the LGBTQ community he so brazenly paraded the support of during his presidential campaign.

In May, Trump and Pence recognized National Physical Fitness and Sports Month.

And yet, they still refuse to recognize #Pride month for #LGBTQ Americans. Why are Trump and Pence so insistent on erasing us?

Reminder that Trump and the White House didn't recognize Pride month in any way in 2017. I'm sure 2018 will be no different.

Sooo the White House is refusing to recognize Pride month for the 2nd year and the Supreme Court just punted ruling on the legality of discrimination against LGBTQ customers. Basically, if Trump gets to shake up the court further, we're screwed. But Happy Pride, y'all!

49 years after #LGBTQ Americans demanded change on the streets outside the Stonewall Inn, we are recommitting to protecting progress won by generations of fierce leaders & tireless advocates from the Trump Administration’s discriminatory agenda! #PrideMonth pic.twitter.com/IkaPmacXbV

Trump said “maybe it’s for the best.” Your president is discriminatory towards the LGBTQ community.

Some have gone a step further, pointing out how Trump has failed the LGBTQ community so far during his first term, despite promising, verbatim, to protect those constituents in exchange for their support during the 2016 presidential campaign.

Since then, his administration has done anything but make good on the protections they insured. Instead, Trump has rescinded Title IX anti-discrimination protections for transgender students, made the decision to exclude LGBTQ identity from questions on the 2020 census, attempted to ban transgender people from serving in the military, spoken at a summit for an anti-LGBTQ organization, appointed anti-LGBTQ judges, and reportedly “joked” that Vice President Mike Pence wants to “hang” anyone who identifies with the LGBTQ community.

Since taking office, President Trump has done nothing to support our #LGBT community. To make things worse, for the second year in a row, Trump's White House has failed to recognize June as LGBT #PrideMonth. #500DaysOfBummer pic.twitter.com/cpoRZCwTjG

Trump in 2016:
— “Thank you to the LGBT community! I’ll fight for you while Hillary brings in more people that’ll threaten your freedoms and beliefs.”

Of course, the “upside” of Trump not speaking up about Pride month for the second year in a row—if any silver lining could be considered—is that he’s not attempting to mask his homophobic supporters and transphobic policies with an empty sign of support.

I don’t want @realDonaldTrump to recognize #PRIDEMONTH because that would mean that he’s lying to us to appeal to voters. Stay silent, homophobe.

Without a doubt, after this first year and a half of his administration’s attacks on the LGBTQ community, anyone would call out any vague display of “support” as a hypocritical appeal to the left.

Yes, there are still just over three weeks left of June for the administration to pivot and suddenly show hallow support. But precedent shows chances of this happening are slim to none.

The White House did not immediately respond to the Daily Dot’s request for comment. We’ll update this article if we hear back.