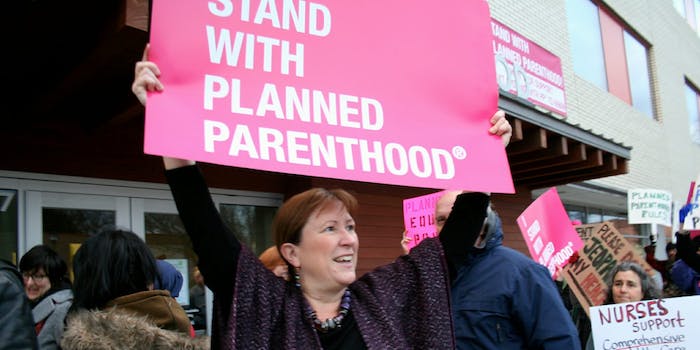 This marks one year of Trump's tirade on abortion rights.

Planned Parenthood and other healthcare providers that perform abortion procedures are no longer protected by a 2016 guidance that prevented states from barring them from Medicaid funding.

According to the Hill, the Donald Trump administration rescinded the guidance, put in place by the Obama administration, allowing states to effectively block Medicaid recipients from seeking healthcare at Planned Parenthood and other facilities.

“Reinstating the pre-2016 standards frees up states to once again decide for themselves what reasonable standards they use to protect Medicaid programs and their beneficiaries,” Yoest said. “This is part of the Trump administration’s effort to roll back regulations the Obama administration put out to radically favor abortion.”

Texas had previously tried to block Planned Parenthood from Medicaid reimbursements but was stopped by the Obama administration. The state has since submitted a request for permission from the Trump administration to do so.

The move is in line with Trump’s year-long effort to block Planned Parenthood and other abortion providers from federal funding since he took office. In January 2017, Trump reinstated the “global gag rule” to block international non-governmental organizations that provide abortion, or mentions abortion as an option, from receiving federal funding. In April, Trump nullified an Obama-era law that blocked states from refusing to use federal funds on abortion providers for Title X family planning services.

In May, Trump proposed a 2018 budget that cut all federal funding for Planned Parenthood, and through the fall and winter, his administration attempted to prevent several pregnant undocumented teens and women in federal custody, such as Jane Doe, from obtaining abortions. Just this week, Trump issued an HHS rule to protect healthcare workers with moral and religious obligations from performing abortions, and he became the first president to speak via satellite at the annual March for Life rally, the largest anti-abortion march in the nation.

Dawn Laguens, executive vice president for Planned Parenthood Action Fund, told the Hill that rescinding the guidance encourages states to go forward with blocking the organization and other healthcare providers from Medicaid.