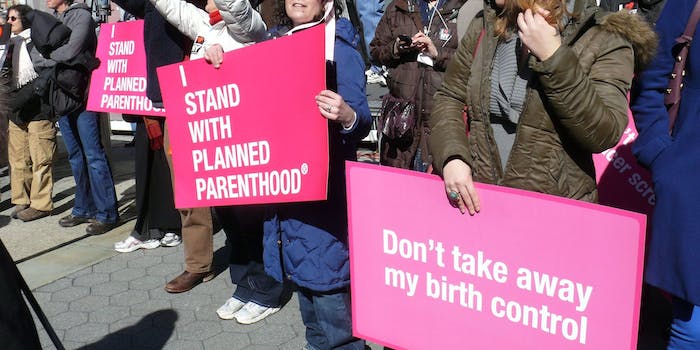 Planned Parenthood could be completely defunded under this proposed budget.

The proposed 2018 budget calls to cut all federal funding for any organization that provides abortions, Planned Parenthood included.

The Trump administration has already allowed states to stop Title X family planning grants from being awarded to healthcare facilities that provide abortion and plans to stop such organizations from receiving Medicaid reimbursements under the American Health Care Act.

However, as Mother Jones points out, the proposed 2018 budget will completely eliminate all spending for any organization that provides abortion services—so even if an organization provides cancer screenings or Zika prevention, it couldn’t receive grants from the Centers for Disease Control and Prevention or through the Violence Against Women Act if abortions were also an available service.

Meanwhile, the Hyde Amendment already bans federal funds from being used on abortion services. Women who use Medicaid or Title X funds—who make up the 60 percent of Planned Parenthood patients who use federal programs—would be unable to use the facility’s other services, and would have to seek STD testing and treatment, birth control prescription, and cancer screenings elsewhere.