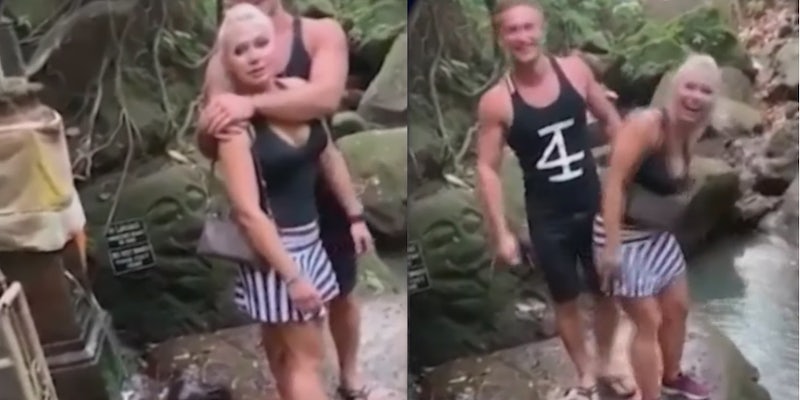 Bali is not happy.

Bali has issued a stern warning against tourists after two influencers recorded themselves decimating a holy site.

In a now-deleted video, Czech Instagram influencer Zdenek Slouka is seen splashing his girlfriend, Sabina Dolezalova, with holy water from the Sacred Monkey Forest Sanctuary–a very popular attraction for tourists who frequent the island. A voice can be heard instructing the couple in Czech when Dolezalova laughingly bends over, lifts her skirt, and her boyfriend proceeds to splash her genitals with the water.

In an act of contrition, the couple participated in a purification ritual, dressed in local clothes where they clasped their hands together and pressed them against their head–a sign of respect. Local Balinese senator Arya Wedakarna believes it should be mandatory for tourists who are disrespectful toward the island to participate in the ritual.

“They made a mistake sullying our island,” Wedakarna told AFP News. “Anyone who violates our traditions must take part in a purification ritual.”

“In the future, if there are tourists behaving like that we should just send them home, they are being disorderly coming to Bali. We will give them this warning,” Koster said, according to the Daily Telegraph.

The warning comes after a string of law-breaking done by foreigners. Recently, video captured an Australian tourist who karate kicked a man off of his motorcycle and was chased down the street by two locals. It was reported that the incident was related to two different cases of vandalism and assault. There was also outrage after a Russian man tried to smuggle a drugged baby orangutan out of the country.