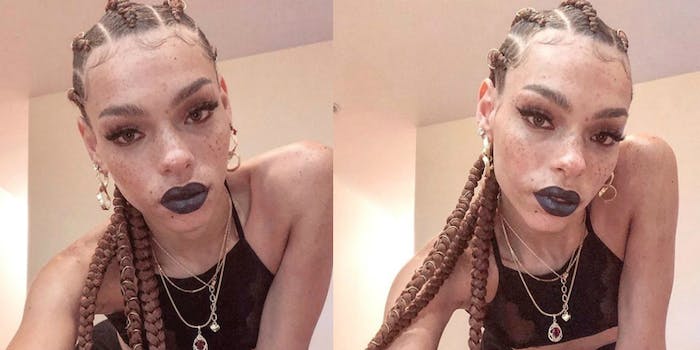 'It’s just sick to me because she’s equating transness to attention-seeking and clout.'

A model with more than 35,000 Instagram followers issued an apology this weekend after admitting she lied about being trans in an attempt to divert criticism from her transphobic comments.

Carissa Pinkston–a 20-year-old known for her freckles and high fashion editorials–was at the prime of her career, modeling for big names in the industry (including a campaign for Rihanna’s Fenty brand) when she was definitively canceled for posting transphobic comments on social media.

Pinkston wrote in various, now-deleted Instagram posts in June that “being Transgender does NOT make you a woman. It makes you simply a transgender,” and “Trans women will never know the pain of menstrual pain, pregnancy, etc. women have to be distinguished.”

Many expressed outrage over her comments on social media. The model said her agency, Elite Model Management, responded by firing her.

In July, Pinkston came out as a transgender woman herself and blamed her “inner insecurities” for the transphobic comments.

“I wasn’t ready to come out about it yet but today I got fired and I’ve been receiving hate mail and death threats ever since so I’m being forced to tell the truth. I’m Transgender. I transitioned at a very young age and I’ve lived my Life as a Female ever since,” she wrote in a now-deleted Instagram post. 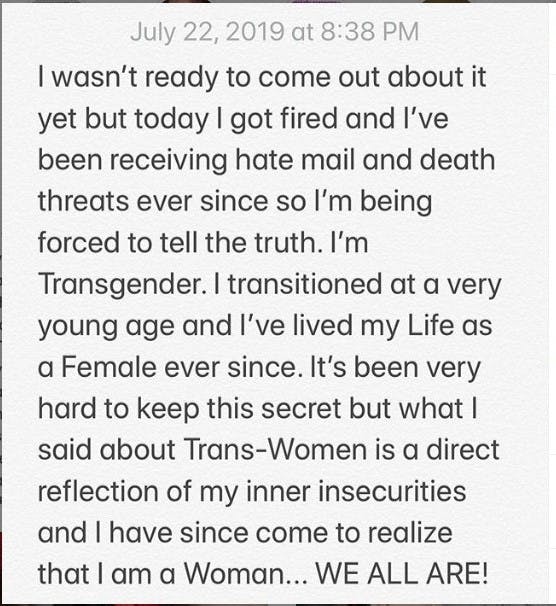 At first, many expressed support for the model, but the tide quickly shifted when commenters–including her own friends–began expressing doubt over Pinkston’s confession.

“Carissa we literally all went to school with you. Shared a locker room. Why are you lying??” Dania Ayala questioned.

Aleece Wilson, a fellow model and friend of Pinkston who supported Pinkston at the beginning of her career, wrote that it was “terrible and disgusting” of her to lie to her 36,000 Instagram followers.

Pinkston’s fans rebuffed Wilson by calling her transphobic, but Wilson doubled down, reminding everyone of Pinkston’s previous comments.

“I don’t appreciate people trying to associate my name with being transphobic at ALL,” Wilson wrote. “Y’all must have forgot about the transphobic ass rant sis went on before MONTHS ago then NOW she decides to ‘come out’ as a trans woman and sis BEEN fired.” 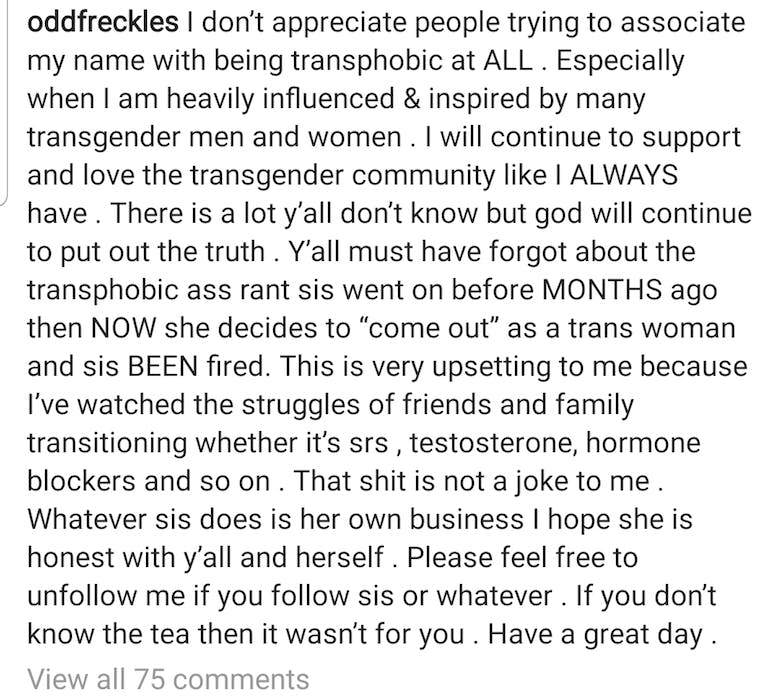 Eventually, the chorus of disbelievers grew even louder, including the voices of prominent Black trans women who were outraged at Pinkston’s alleged attempt to co-opt their identity just to evade cancelation.

“Sis got dropped for transphobic comments then decided to come out as transgender to avoid backlash,” trans model and artist @MojoDisco tweeted. “Her friends and family then exposed that she ain’t trans at all.”

Sis got dropped for transphobic comments then decided to come out as transgender to avoid backlash. Her friends and family then exposed that she ain’t trans at all.
The straights must be stopped. pic.twitter.com/x5t7yKPZfp

Black trans model Aaron Philip, who is represented by Elite, knows Pinkston through the agency and mutual friends.

“Imagine being a model who got exposed for being a raging transphobe/saying extremely transphobic shit in the past and then resorting to LYING ABOUT BEING TRANSGENDER ONLINE FOR CLOUT IN ATTEMPT TO SAVE YOUR CAREER..?” Philip tweeted on July 23. “I know this person irl and she is SO CISGENDER.”

imagine being a model who got exposed for being a raging transphobe/saying extremely transphobic shit in the past and then resorting to LYING ABOUT BEING TRANSGENDER ONLINE FOR CLOUT IN ATTEMPT TO SAVE YOUR CAREER…? i know this person irl and she is SO CISGENDER?? Y’ALL I-? pic.twitter.com/GtB55p8Cr5

Philip told the Daily Dot that she was highly offended by Pinkston’s post.

“It’s just sick to me because she’s equating transness to attention-seeking and clout,” she said.

“To make fun of being trans or to put on transness on like a coat when Black trans women are dying twice a month is beyond insensitive; it’s plain tacky,” @MojoDisco told the Daily Dot.

Pinkston eventually took down her coming-out post and deleted comments questioning it—but not before refusing to back down from her claim that she is a trans woman. At one point, she posted a Facebook status seeking other trans individuals to unify with so that they could “educate the public.” She eventually deleted that post, as well.

“I apologize for any Transphobic remark I’ve ever made towards the Trans Community,” she wrote. “I panicked and I thought if I came out as Trans that I could somehow make things better for myself but it appears I’ve only made things worse.”

For some trans women, like Philip, the apology is too little too late. She also doesn’t believe that being young is a substantial excuse in this situation.

@MojoDisco also has no sympathy for Pinkston.

“She should have owned up to her transphobia off the top,” @MojoDisco said. “But when you do clownery, the clown comes back to bite.”

The Daily Dot has reached out to Pinkston, Wilson, Ayla, Gabi Spetrini, and Elite Model Management for comment.