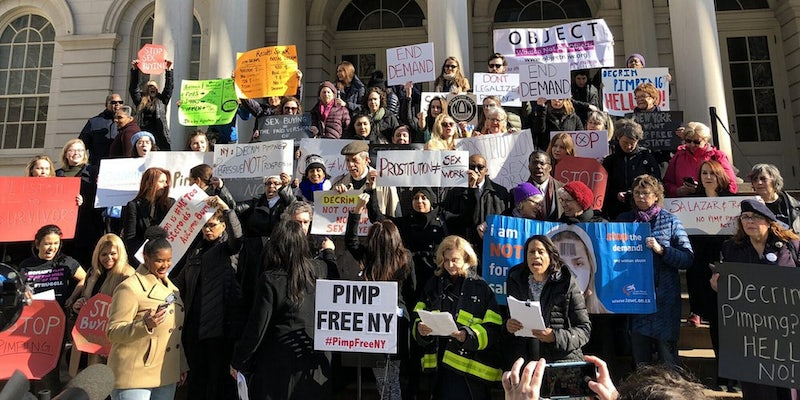 If you want to support trans rights, then decriminalize sex work

“You literally can’t support trans people while also supporting criminal laws that overwhelmingly target them,” adult performer Lorelei Lee tweeted on Tuesday. “[F]or a group called the National Organization for Women to tell women & femme workers that we can’t be believed because we’re controlled by men is just the fucking height of hypocrisy.”

Lee’s tweets, while true, weren’t unprovoked. On Monday, the New York City chapter of NOW, the storied American feminist organization, hosted a rally at City Hall in Manhattan protesting “the decriminalization of pimping and buying sex,” calling for “a middle ground that protects people engaging in the sex trade without legalizing pimping.” The protest came just two weeks after Decrim NY launched a coalition for the “comprehensive decriminalization” of sex work across New York. In particular, the group hopes to “[repeal] misdemeanor prostitution charges for transactions between consenting adults” and “[erase] prostitution records” for sex workers and trafficking survivors.

For many, Decrim NY is a sign of the times: the next fight for queer rights is sex workers’ rights. But feminism has a long, complicated, and deeply uncomfortable history with sex work. SWERFs (Sex Worker-Exclusionary Radical Feminists) believe that sex work enables the patriarchy and ultimately seek to shame and punish sex workers; they do not see sex workers as humans who have autonomy over their own bodies, which is the foundation of feminism.

NOW’s rally is just the latest example of this oppressive understanding. Anti-sex worker rhetoric can be found throughout its announcement, arguing that decriminalization will lead to “pimping”—despite the fact pimps are increasingly preying on sex workers since the passing of so-called “anti-sex-trafficking law” SESTA-FOSTA last year.

Join us on the steps of City Hall on Monday, March 11th at 10am to protest the decriminalization of pimping and buying sex. We need a middle ground that protects people engaging in the sex trade without legalizing pimping. pic.twitter.com/TWkxSkRlxD

Yes! Criminalization only further isolates our community and makes us more vulnerable to exploitation! It makes it impossible to organize for safety https://t.co/0unmKTaoBc

But something else happened during NOW’s protest. Whether the organization expected this or not, transphobes showed up to join in on the sex-work bashing. For one, a U.K.-based group called “Object Now” arrived with explicit anti-transgender language: A photo captured by Grant shows two women from Object Now holding a banner that says “NO to the sex trade, surrogacy and transgenderism.” Also there: Canada’s London Abused Women’s Centre (LAWC), which signed a letter supporting writer Meghan Murphy, who has been called out repeatedly for her TERF (Trans-Exclusionary Radical Feminist) views, according to the Appeal reporter Melissa Gira Grant.

While LAWC’s website remains relatively mute on trans topics, visiting Object Now’s official webpage reveals the organization is vehemently against “transgender ideology.” Among other claims, the U.K. group argues that trans men’s gender transitioning is a “form of lesbian conversion therapy,” that trans women are committing “the invasion of women-only sex-protected spaces,” and that cisgender lesbians are “coerced into accepting these men [referring to trans women] as ‘women’ and to have sexual relationships with them.”

Of course, none of these unfounded ideologies make sense if you perceive sex and gender as existing on two uniquely separate spectrums. They’re not supposed to. Transphobia and whorephobia—or anti-sex work beliefs and values—start and end with hating women. Anything more than that is just cover.

The National Organization of Women collected today in NYC to spew TERF & SWERF rhetoric, and physically cover the signs of sex workers, signs that said “Listen to Sex Workers.”

All that is shameful about second wave feminism, in one place. Well done.https://t.co/QfI2bQy6qw

Don’t take my word for it; Grant has already spoken about this topic in depth. In her work Playing the Whore, she stresses that TERFs and SWERFs walk hand-in-hand against a “reliably available form of income” for gender nonconforming workers.

“Anti-sex work feminists, meanwhile, don’t see sex work as a place for any woman,” Grant writes. “It is telling that many feminists who wish to abolish all forms of sex work, like The Transsexual Empire author Janice Raymond and author of The Industrial Vagina Sheila Jeffreys, refuse to accept that trans women are women. They appear to believe that those engaged in sex work are not yet capable of being real women.”

SWERFs benefit from a society where those who don’t engage in sex work are seen as pure, chaste, and sexually valuable. Meanwhile, cisgender women benefit from being seen as the world’s default form of womanhood. Unsurprisingly, both of these beliefs conform to white, heteronormative, Euro-centric gender roles for women. That’s for a reason. As writer Sophie Lewis explains, this is because SWERFs and TERFs see bodies as being “ahistoric” and unaffected by the culture we find ourselves in. It’s as if there is an “immanent selfhood” that’s disgraced by transitioning genders or doing sex work.

If you treat your identity as timeless and innate, it silences criticism. The privileged becomes the norm, enforced through sex workers’ and trans peoples’ biggest enemies: the police, the transphobic and whorephobic state, and violent bigots. This is one of the reasons why Black trans women who do sex work are particularly the most vulnerable, and why their voices should be raised the highest.

“The bottom-up trans/sex-worker movements are not primarily under siege from SWERFs and TERFs, nor even from [bioconservative trans figures like] Caitlyn Jenner, but from terrorists and cops,” Lewis writes. “Only with this significant qualification should one turn to the attacks operating from the right, coming from anti-feminists and feminists alike.”

In queer and feminist theory, we talk a lot about intersectionality as a form of solidarity between the oppressed. But there’s a darker side to intersectional thinking: Sometimes oppressors band together too, from lawmakers who hate sex workers to academics who hate trans women. This is why it’s so important for sex workers’ rights groups to uplift its trans members, and for trans rights organizations to vehemently support decriminalizing sex work. Like Lee mentioned on Tuesday, their struggles are one and the same.

Decrim NY clearly understands this. When reached for comment by the Daily Dot, Decrim NY’s Nina Luo explained that the organization has “worked to uplift trans members of our coalition to leadership positions,” and that in the organization’s consensus-driven Steering Committee, Decrim NY prioritizes its trans voices.

“Everyone has internalized transphobia, just like we have internalized racism, sexism, classism, and homophobia, and it is our obligation to continuously work to transform ourselves to be better allies in the fight against criminalization of and discrimination and violence against trans people,” Luo told the Daily Dot over email. “Trans communities often face economic, social, criminal and other barriers to participation. We’re trying to raise money to address some of those barriers, but it also means we need to continuously do political education to make our space as welcoming to trans people as possible.”

We will win, because we fight for the most marginalized amongst us https://t.co/1EOVupChOZ

Today I'm incredibly inspired by the sex workers, trafficking survivors, immigrants and TGNC folks fighting for the decriminalization of sex work with @DecrimNY while enduring transphobia and sexual assault.

They are going to end both criminalization and sex trafficking.

It’s hard to say for certain whether Decrim NY will be successful. But it’s speaking truth to power, and it has powerful people on its side. Look no further than the DSA’s New York State Senator Julia Salazar, who is working with Decrim NY on introducing legislation to decriminalize sex work. When reached for comment, Salazar expressed support for not just sex workers, but for trans people too.

“Decriminalizing sex work is a trans justice issue as well as a criminal justice issue because trans people, especially low-income trans people, are more likely to use sex work as a way to survive in a hostile society,” Sen. Salazar told the Daily Dot. “The transphobia and anti-surrogacy sentiment prominently exhibited by opponents of the Decrim NY coalition is disturbing and shows how elements of this coalition are not concerned with the actual lived experiences and testimony of sex workers generally and trans sex workers specifically.”

Salazar also called on Decrim’s opponents to distance themselves from the transphobic statements made at NOW’s rally.

“I hope that other opponents of Decrim will denounce transphobia and find an opportunity to directly listen to the perspectives of trans sex workers as to the policies that will make their lives easier and safer,” Salazar continued.

For the record, NOW-NYC tweeted on Monday that “we strongly support transgender rights and we’re vehemently opposed to @ObjectUK and the abhorrent viewpoints and language it puts forth in its anti-trans agenda,” stressing that the group apologizes “for not recognizing their presence and shutting them down.”

But in NOW’s case, walking forward with SWERFs assures TERFs are not far behind. To support trans rights, one must support sex workers too: There’s simply no in between.