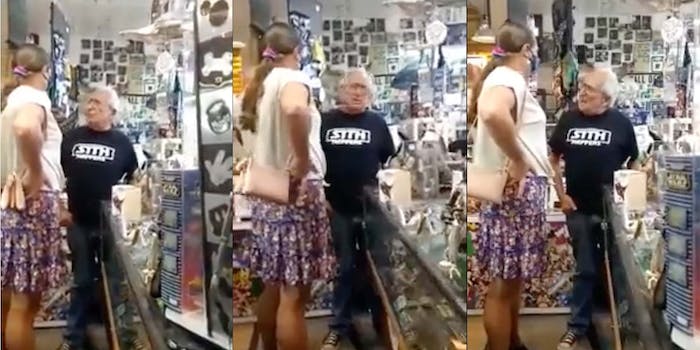 The shop owner questions Tiesa Meskis about her genitalia in an apparent effort to humiliate her.

In a video from Aug. 5, City Councilwoman Tiesa Meskis is seen confronting a shop owner in Aberdeen, Washington, about a transphobic sign in the store.

The store was identified as Sucher & Sons Star Wars Shop, according to local news station KING 5, and the sign reads: “If you are born with a dick, you are not a chick.”

“Trans women are women, sir,” Meskis says to store owner, identified as Don Sucher by KING 5. “That sign is bullshit.”

Sucher responds by telling Meskis that trans women are men and that she’s an embarrassment to Aberdeen’s City Hall.

Their verbal altercation continued outside Sucher’s store as well, where a passerby voiced her support for Meskis and said Sucher had lost her business.

Sucher also questioned Meskis about her genitalia—a topic that many trans women say is incredibly personal—in an apparent effort to humiliate her.

“You don’t get to ask that,” Meskis told Sucher. “You are a fucking idiot,” she continued when he refused to stop making comments about her genitalia.

“I want to be in your fucking face because nobody confronts your stupid ass,” said Sucher. Meskis threatened to call the police if Sucher didn’t stop harassing her outside of his store.

In an interview with KING 5, Sucher referenced his right to free speech and said that he doesn’t care that his sign is hurtful.

Meskis told KING 5 that the sign was “so demeaning and so dismissive” of trans women like herself.

“We are people,” Meskis told KING5. “We are who we are and we all want to be accepted in our community.”

The Daily Dot has reached out to Meskis and Sucher. KING 5 reported that both parties planned dueling demonstrations to be held outside Sucher’s store on Aug. 7.