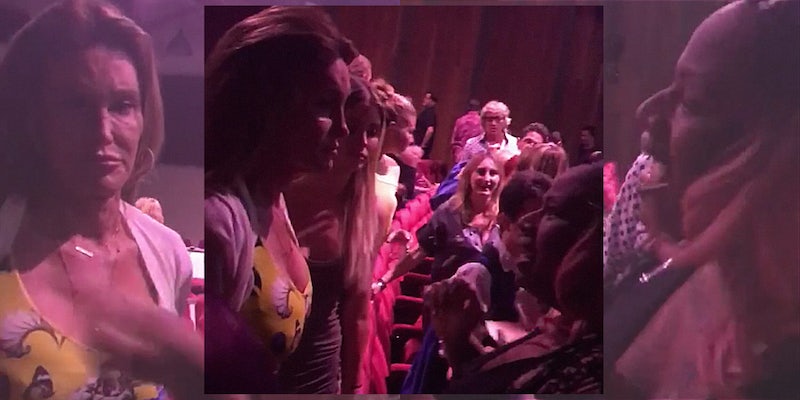 Ashlee Marie Preston made headlines earlier this year after feminist magazine Wear Your Voice appointed her as editor-in-chief, making her the first transgender woman of color to head the publication. And now that she’s in the role, she isn’t backing down from trans activism in the public spotlight.

At the Trans Chorus of Los Angeles’ The Rise and Fall of Ziggy Stardust concert on Saturday, Preston spoke her mind to celebrity activist Caitlyn Jenner. Preston confronted Jenner after the event, criticizing her for supporting President Donald Trump amid his actions against the trans community. A crowd quickly gathered around the two women as they began to fight.

“It’s really fucked up that you continue to support somebody … that does everything with the military, that’s erasing our fucking community,” Preston is seen telling Jenner in a Facebook video posted by Preston. “And you support it.”

“You’re continuing to support somebody that does everything with the military that’s erasing our fucking community, and you support it,” Preston told Jenner. “That’s not community.”

Performance co-chair Dena Williams later approached Preston and Jenner in an attempt to de-escalate the situation. But Preston criticized Williams as well. Jezebel reports that the performance was partially sponsored by Jenner, leading Preston to argue that the event was complicit in Jenner’s conservative politics.

“As long as we continue to be the ones that are most impacted by the choices that you make, it is not OK,” Preston told Williams. “We are complicit. Taking her money and doing all that? It makes us complicit. It goes against the mission.”

Although Jenner did not respond for most of the fight, she tried to defend herself toward the end.

“Yes, I do!” Preston quickly replied. “You’re a fucking fraud and a fake.”

Preston’s fight has since gone viral. She’s refused to back down, arguing that calls for “respectability” and “etiquette” are created from the “beneficiaries of slavery and genocide.” In other words, white supremacy demands black trans women bend to white peoples’ will, and Preston is having none of that.

Many supported Preston, praising her for confronting Jenner.

My girl Ashlee Marie Preston doing the Lord's work, preaching the gospel, and feeding all of us children. https://t.co/qrwXc44WHQ

Really no denying the points Preston makes here. IMO, Jenner's been a disaster, much more of a hindrance to trans progress than a help.

But some used the call out as an opportunity to rail on both Jenner and Preston, slinging transphobic insults at the two women. For bigots, political tension in the trans community is tabloid entertainment and drama.

He's a hideous nasty vindictive fraudulent creature & I wish people would seriously stop sucking up to it!!!!!

Jenner’s support for Trump remains an open question. Earlier this month, she was spotted driving around Los Angeles wearing a “Make America Great Again” hat, shortly after condemning Trump for announcing the trans military ban. Aligning herself with the Republican Party, Jenner has previously flirted with running for Senate, although it remains unclear if she will officially enter national politics. Either way, it seems the trans community is quickly growing impatient with Jenner.