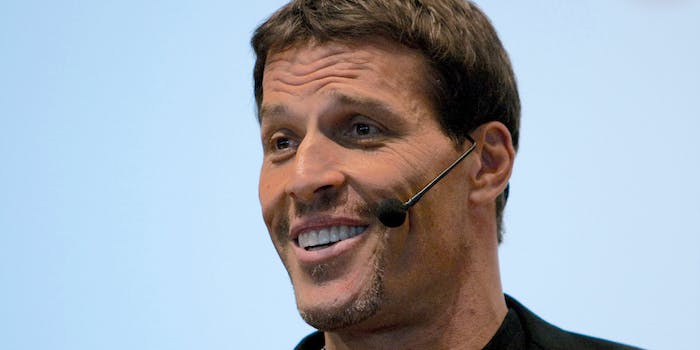 The founder of the #MeToo movement had words for Robbins.

A video of motivational speaker Tony Robbins criticizing the #MeToo movement has gone viral and dozens of women—including the founder of the movement—have responded to his remarks.

In mid-March at his “Unleash the Power Within” self-help event in San Jose, California, Robbins told the audience that the #MeToo movement is an excuse for women to use “victimhood” to help them gain “significance.”

“If you use the #MeToo movement to try to get significance and certainty by attacking and destroying someone else… all you’ve done is basically use a drug called ‘significance’ to make yourself feel good,” Robbins says in the video.

In an 11-minute video captured by one of the event attendees, an audience member named Nanine McCool—who is a survivor of childhood sexual abuse—told Robbins she felt he misunderstood and mischaracterized the #MeToo movement by claiming that women are using it for their own personal gains.

The life coach disagreed and said he’s not knocking the #MeToo movement and anyone who’s used it “correctly,” but that he’s criticizing “victimhood.” He then walked McCool backward through the aisle of the stadium by pushing against her fist, asking her why she’s resisting his push in order to make his point—that pushing against someone else won’t make you safer.

Robbins didn’t quit there. He then implied that women have become a liability in the workplace because of the movement and used an example about one of his “very powerful” friends.

“I was just with someone the other day, very famous man, very powerful man,” he said. “He’s saying how stressed he is because he interviewed three people that day—one was a woman, two were men. The woman was better qualified, but she was very attractive, and he knew, ‘I can’t have her around, because it’s too big of a risk.’ And he hired somebody else. I’ve had a dozen men tell me this.”

“This is what so many people are doing—they’re just saying they’re sorry … ,” he said. “I’m not here to comply.”

Almost a month later, Robbins’ remarks have been launched into virality because of a video posted by ThisNow on Twitter.

Life coach Tony Robbins says women are using #MeToo to make themselves 'significant' — but this brave sexual abuse survivor called him out pic.twitter.com/wYxhlmc10u

Tarana Burke—an activist who first used the term “Me Too” in 2006 to raise awareness about the pervasiveness of sexual assault and harassment in society—responded to Robbins in a lengthy thread on Twitter.

I was made aware of this video BEFORE I ever saw it because Tony Robbins people reached out to do damage control within 24 hours. They wanted to “give me context” apparently. I don’t need any. I have eyes. The full video is 11 mins. And it’s gross. Bravo to this woman. https://t.co/gjbm9GF1Mz

Oh the video is MUCH worse. His misogyny runs deep. To even repeat that story of his ‘friend’ who wouldn’t hire the ‘pretty woman’ as if it’s the MOVEMENT’s fault and not the sexist man’s fault is all you need to hear. It’s deplorable. But SO many folks misunderstand this work.

And he is clear that he won’t apologize so it is what it is. If you choose to keep supporting him it’s with full knowledge of his views on women and survivors.

This moment is so damaging especially with how influential @TonyRobbins is. We have a hard enough time trying to shift the narrative about what this movement really is and he stands in front of thousands of his followers and completely misrepresents the @MeTooMVMT

Crash course @TonyRobbins:
1. @MeTooMVMT is NOT about victimization it’s about SURVIVORS

2. Women are not to blame for the deep seeded misogyny that you and men like your ‘friend’ are mired in. #metoo

3. Survivors are not complicit in their own abuse. Speaking our truth is part of healing not a ploy to gain ‘significance’ – bc when does that even HAPPEN?!

4. Physical intimidation can be a form or harassment. Rewatch that video and then watch your step homie.

5. This movement is about making sure survivors have the resources to heal AFTER they’ve said #metoo, it’s about galvanizing a global community or survivors and advocates to do the work of interrupting sexual violence. It’s about protecting folks’ human dignity at all cost.

@TonyRobbins If you talk to more SURVIVORS and less sexist businessmen maybe you’ll understand what we want. We want safety. We want healing. We want accountability. We want closure. We want to live a life free from shame. That’s the reality of the @MeTooMVMT sir, do better.

And she wasn’t the only person to tweet their disgust at Robbins’ comments.

I've never understood the appeal of Tony Robbins…and it's always shocked me how many influential and powerful people rely on his advice… https://t.co/qk27i0VTas

Tony Robbins has made millions of dollars putting himself out there as a “self-help” expert. Well, it turns out he’s a disgusting misogynist who everyone should stop supporting. This is exactly why the #metoo movement exists. https://t.co/x5PRNEsLf9

Tony Robbins is so in the wrong here with his overt physical intimidation & verbal bullying tactics. The #MeToo movement isn't trying to "get significance", it's pursuing #justice & cultural change. #MeToo isn't "attacking" someone else, it's holding perpetrators accountable.

Tony Robbins is hugely influential, and I wish he'd shut up and really listen to what women are saying. No woman looks for "significance" by being an assault survivor: they are looking for justice, fairness, opportunity — all the things that Robbins claims to stand for. https://t.co/wZLqPLhCla

Jennifer Connelly, a spokeswoman for Robbins, told Vice that in the full context of his speech, Robbins’s remarks about the #MeToo movement were not derogatory and offered the following statement:

“Tony Robbins is and always has been supportive of the #MeToo movement. He has devoted his life’s work, over 40 years, to help people end their pain and suffering and most importantly improve the quality of their lives. Tony is against abuse of any kind, to anyone, period.”

Vice also noted that Robbins’s team offered to send further video of the seminar on the condition that the publication sign a confidentiality agreement and not report on the contents of the video. The news site declined that offer. His team also declined to answer follow-up questions about the content of his remarks.

The 58 year-old’s website says he is the author of six internationally bestselling books and has “empowered more than 50 million people from 100 countries through his audio, video, and life training programs.” More than 4 million people have attended his live seminars, and he has more than 3 million followers on Twitter.

Update 12:24pm CT, April 8: Robbins has officially apologized for his encounter, saying he respects the #MeToo movement and everything for which it stands. Even though he’s worked for 40 years to improve people’s lives, he also said he needs to make more of an effort to connect with those who are in the #MeToo movement.

Said Robbins: “I am committed to being part of the solution.”

. @TonyRobbins statement apologizing for his comments about the #MeToo movement. pic.twitter.com/C0iARUnfas