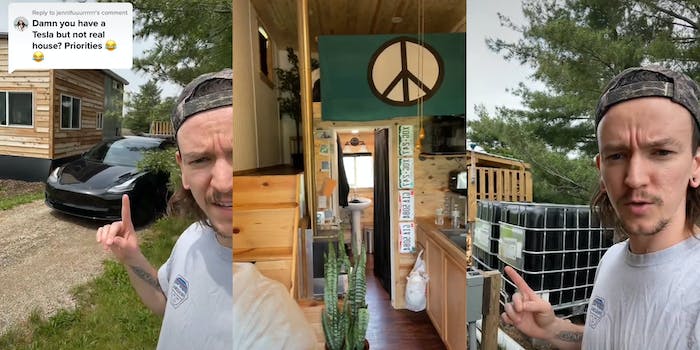 ‘You think me having a Tesla and tiny house isn’t good priorities?’: Man shuts down viewer who criticized his home, car

'This tiny house has everything I need in it. And I mean everything.'

A TikToker went viral this week after responding to a viewer comment apparently mocking him for having both a tiny house and a Tesla.

“Damn you have a Tesla but not real house? Priorities,” the user wrote, followed by two laughing emoji.

But, as user Jack (@jackleonardbirt) noted, his tiny house has “everything [he] need[s],” and his Tesla’s low energy cost means he can nearly be self-sufficient with limited financial and physical resources.

In the video, Jack gives a tour of his tiny house, which he says has an area of 240 square feet.

His tiny house has a PC setup, kitchen, loft, shower, washer, dryer, and more, according to the video. Jack installed rainwater harvesters, a composting area, and a garden with fresh vegetables outside.

He also reveals he works for DoorDash, which allows him to “practically have no overhead” as it takes him “$2 a day just to drive.” He also claims he will soon be installing both wind and solar power capabilities to further improve his self-sufficiency.

In comments, users supported Jack’s tiny house decision and joined him in mocking the previous commenter.

“I swear they think you homeless cause your house is not big,” one user wrote. “I love your content!”

“How is this not ‘real’ priorities?! People think everyone is supposed to be house poor!” another added. “House poor should never be the norm!”

Many others noted that, given the current issue of inflation, Jack may have the right idea by trying to become self-sufficient.

“The way inflation is hitting, [you’re] winning compared to the average,” a commenter shared.

“Dude saying ‘what inflation?’” another agreed.

In the comments section, Jack reminded users that his lifestyle is available for anyone who is interested—they simply have to build it.

“The good life can be for anyone who wants it,” he wrote. “Do good, think minimal and stop caring what others think.”