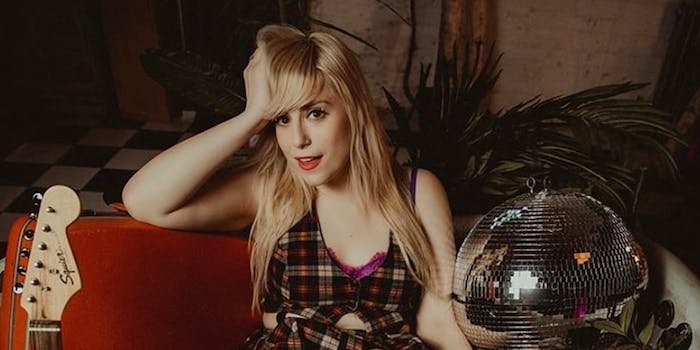 'It hasn’t gotten easier to give the least, dude.'

You’d think almost a year of government-mandated isolation would result in deep personal reflection of relationship goals. But if anything, in the dating app world, it’s apparently only made some people more brazen. Vaccinated fuckboys, fuckgirls, and fuckpeople may be on the prowl, but at least that means there are plenty of unhinged profiles to laugh at.

“I think some guys literally thought, ‘Oh, these girls have been locked up for so long. We can just do whatever, and they’ll be so down to sleep with you,’” Lane Moore, host of dating app comedy show Tinder Live, joked in a deep bellow.

After spending over a year navigating dating apps from inside their apartment, the comedian and author of How To Be Alone is returning to the stage with their Tinder app in tow, this time with thousands of profiles boasting their double-vaxxed status.

Moore began hosting their wholly improvised comedy show, Tinder Live, In 2014. Their post-lockdown tour kicked off in Boston on July 17, and Moore again swiped through the dating profiles of horned-up individuals in front of a live audience. Moore is taking the tour to over 33 cities this summer and fall.

During the pandemic, Moore continued their show via Zoom, combing through the profiles of lonely, quarantined New Yorkers on a screen full of global viewers. Though Moore is happy to finally be back in physical spaces, they said there was a new kind of intimacy to digital shows where they could see the faces of each member of the audience.

While there’s potential for more virtual shows, for now, Moore is ready to dive into the post-quarantine dating pool. They say people have been much less attached to small talk and more open to bolder conversation, even if it gets a little weird.

“I think, in the last year, people are so hungry for connection of any kind. I think that’s what’s been really cool. It’s like the longer I’ve been doing the show, I think we’re realizing more and more that we want something more than just like, ‘Hey, how’s it going,’ ‘Hey,’ ‘Hey,’ on dating apps.”

At a recent virtual show, Moore highlighted a profile photo of a man walking away from the camera and turned it into a bit about him inevitably abandoning their family—and the guy played along. The bit lasted nearly the whole show, a testament to the power of playful banter.

Despite more interesting conversations taking place in the DMs, the pandemic wasn’t introspective for everyone. Moore says some people (especially men) haven’t really changed their ways. As Moore puts it: “It hasn’t gotten easier to give the least, dude.”

Still, amid post-lockdown #HotGirlSummer and the persistence of hook-up culture, Moore is fully confident that Tinder won’t slow down anytime soon. Vox reported that Tinder conversations were 32% longer amid the pandemic, and the platform hit a record-breaking 3 billion swipes in a day in March 2020. Users also matched 42% more than before the pandemic, a sign of either transformed outlooks or lowered standards.

“I remember somebody saying to me at one point, like, ‘What are you gonna do, it’s like, at some point people aren’t using dating apps?’” Moore said. “But I just remember thinking, ‘I don’t think it’s gonna slow down.’ If anything, more people use them now than ever.”

With a virtual stack of eager Tinder profiles, Moore is ready to get back on the road. The localized dating pools of American cities await, the kind Moore missed while staying in New York City throughout the pandemic.

“Anytime I go to Washington, D.C., it’s like a lot of people who work in politics,” Moore said. “When I go to Portland, it’s like everyone is in a flannel in the woods. It really becomes a celebration of all of these cities and all these things that make them unique.”

Fortunately, Tinder Live fans and newbies can experience the dating profiles of strangers, acquaintances, and friends publicly ridiculed on a stage—a surefire sign that live comedy, and fuckboys, are back.