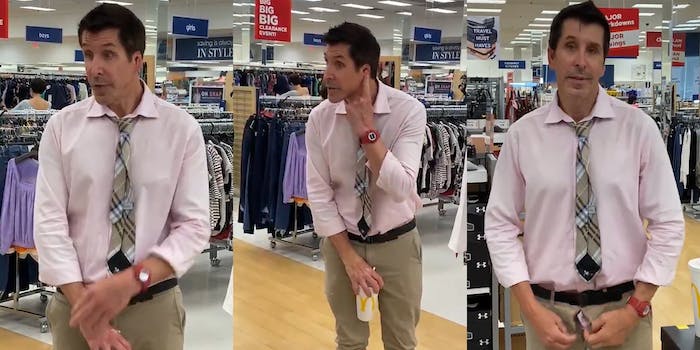 Update 1:45pm CT, Aug. 27: A representative for Tim Gaskin denies initial reports that Gaskin took out his penis in Marshalls and says it was fabricated by a video editor who blurred Gaskin’s crotch during the part in the viral clip where he unzips his pants and stares at the camera. Gaskin’s representative said that as a victim of hate crimes himself, Gaskin feels justified to use a homophobic slur against someone whom he says was berating him with homophobic slurs prior to the video being filmed. Gaskin says he was followed around in the store by a “TMZ blogger” for more than 30 minutes before his viral incident. The original story below has been updated.

With the glut of “Karen” and “Ken” outbursts circulating on social media in recent months, it’s hard for one public meltdown to stand out from the rest.

Not so for Tim Gaskin, a former LGBTQ talk show host who went on a homophobic rant in a Marshalls department store in San Francisco and appeared to whip his penis out after an employee confronted him.

Pavel Paulinich shared Gaskin’s tantrum on his Karens Going Wild Twitter account (@pavelpnews), and it’s doing big numbers on the r/PublicFreakout subreddit, earning over 67,000 upvotes at the time of this writing. The video begins with a maskless Gaskin cursing out a Marshalls employee and using a homophobic slur.

When the employee tells Gaskin he can’t use that kind of language, Gaskin threatens to sue the store for $75,000 if they kick him out. He cites protections from the “Freedom to Breathe Agency,” which is not a real government agency.

Gaskin further argues that it’s a “health code violation to deny service based on someone’s disability”—another false claim, as the Americans with Disabilities Act “does not provide a blanket exemption to people with disabilities from complying with legitimate safety requirements necessary for safe operations,” per the Department of Justice’s website.

After more threats from Gaskin, the Marshalls employee asks for his name, at which point Gaskin sexually harasses the staff by unzipping his pants and staring at the camera.

“Look up the law and put [this video] right next to the law,” Gaskin says. “’Here’s the law and here’s the idiot that filmed me.’ It’s gonna be a whole epiphany for you.”

As if this video weren’t enough to make Gaskin a certifiable asshole, his professional history also makes him a giant hypocrite. In 2004, Gaskin began hosting a public access show called OUT Spoken that covered LGBTQ issues in San Francisco, CBS SF reports. According to his LinkedIn, Gaskin also served as editor-in-chief of Benefit, a lifestyle magazine focused on volunteerism and philanthropy, from 2009 and 2011.

Despite his media background, Gaskin seemed woefully unaware of the viral potential of his freakout.