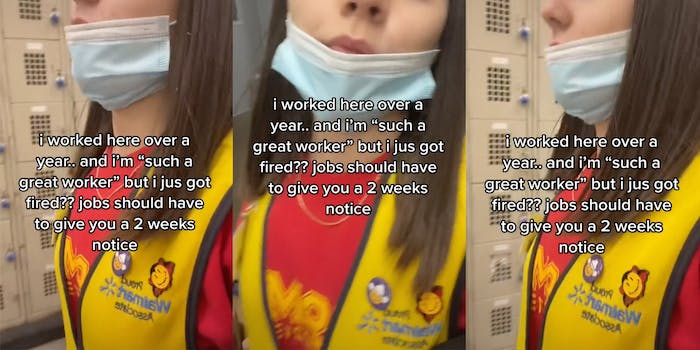 ‘F*ck Walmart’: TikToker says she was randomly fired after being told she was ‘such a great worker’

In a viral TikTok posted on Nov. 22, user Jacee Buhr (@jaceeyoulaterwh0re) says that she was suddenly fired from her job at Walmart after working there for “over a year.” On Wednesday, the video had over 341,000 views.

“I’m ‘such a great worker’ but I [just] got fired,” Buhr wrote in the overlay text of her TikTok. In the video’s caption, she wrote that she trained “her replacement,” took her lunch break, and was fired when she returned to work. Based on other videos on her account, it appears that Buhr is also in high school.

Commenters on Buhr’s video said they had had similar experiences when working at Walmart.

“What u said happened to me word for word at Walmart,” user @eyevurson wrote. They advised Buhr to call the store’s corporate offices and ask for two weeks of pay as compensation.

“They didn’t even tell my brother he was fired,” @lalanihoops commented. “Just took him off schedule.” Buhr responded saying she hadn’t been taken off the store’s schedule yet.

Others lamented about “favoritism” at Walmart.

“I’m dead tired of Walmart. The favoritism is toooo much,” @alyssamariebk wrote.

“Walmart is a favoritism company,” commented @coollyse, who also called the store “toxic” and said they quit before they could be fired.

User @krissy2wavy said the same. “I will [never] work for them again,” they commented. “Too much favoritism for me.”

The Daily Dot has reached out to Buhr and Walmart for comment.