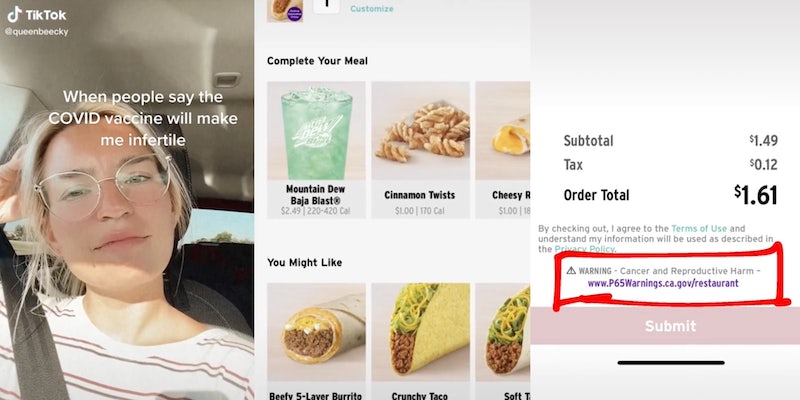 ‘I’ve had a lot of Taco Bell in my life’: TikToker shuts down argument that vaccines are harmful to fertility by showing Taco Bell’s ‘reproductive harm’ warning label

One argument being peddled about the COVID-19 vaccine is that it will cause reproductive harm due to some of the ingredients listed on the vial. However, according to the Centers for Disease Control (CDC), there is no evidence that any vaccine causes fertility issues.

A TikTok creator has taken to the platform to make the point that while COVID-19 vaccines have been established as safe, with no evidence that they cause reproductive harm or cancer, that warning label actually exists for something else people are far more likely to consume without complaint: Taco Bell.

On the Taco Bell website, as well as its app, it is stated that “Certain foods and beverages sold or served here can expose you to chemicals including acrylamide in many fried or baked foods, and mercury in fish, which are known to the State of California to cause cancer and birth defects or other reproductive harm.”

This warning is present because of a California law that requires companies using materials known to cause cancer in their food products or packaging to disclose this information to customers. The New York Times reported that consumers should “probably not” worry about the label. “The Prop 65 label is like a noisy alarm that rings equally loudly about smaller amounts of low-risk substances and huge amounts of potentially harmful chemicals. The labels don’t say how much of the chemical is present, or how much it would really take to make a person sick,” it noted in 2020.

The poster of the video, @queenbeecky, used a text overlay reading: “When people say the COVID vaccine will make me infertile,” followed by a screengrab of the warning featured in her Taco Bell app, to make her point. Her video has gained 1.1 million views on the platform.

She used the sound “Mama said that it was OK” for the clip.

Commenters on the video likewise expressed that they were essentially fine with it—they’d continue eating Taco Bell and get vaccinated.

“I love Taco Bell and vaccines and also have two kids,” one commenter wrote. “Y’all go ahead and get em both.”

“I ate nothing but taco bell my whole pregnancy,” another said.

Others remarked that people shook by the warning label had never been to California, at least not for a meaningful amount of time.

“Tell me you know nothing about the P65 warning without telling me,” one commenter wrote. “They put that in everything. That’s for their wrappers basically for example.”

The Daily Dot has reached out to @queenbeecky on TikTok as well as Taco Bell about the video.