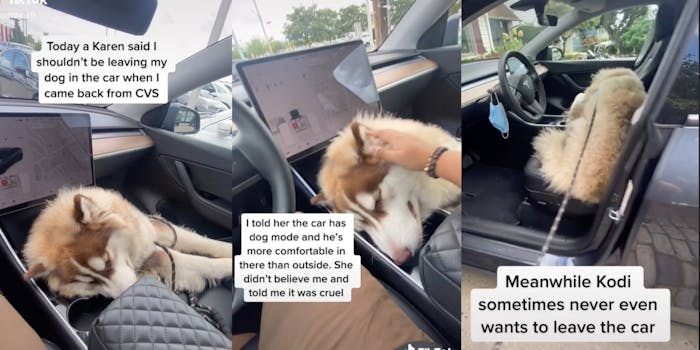 TikToker says a Karen got upset they left Husky in Tesla with ‘dog mode’ on, sparking debate

'That's not a Karen that's a caring citizen.'

A video of a driver telling the story of a woman who got upset with them for leaving their dog in their Tesla on “dog mode” has racked up 3.3 million views on TikTok.

“She was well-intentioned until she literally didn’t believe the screen saying it’s 65 degrees,” the video is captioned.

The account, @kodithek9, is devoted to a red Husky named Kodi. In the video, Kodi’s owner explains that they ran into CVS with their car on dog mode, but when they returned, a woman had a lot to say to them.

“Today a Karen said I shouldn’t be leaving my dog in the car when I came back from CVS,” text overlay on the video reads. “I told her the car has dog mode and he’s more comfortable in there than outside. She didn’t believe me and told me it was cruel. Meanwhile Kodi sometimes never even wants to leave the car.”

The woman’s actions sparked some debate, with many claiming that she should not be referred to as a Karen.

“That’s not a Karen that’s [a] caring citizen,” one commenter wrote. “I would do the same you cannot just assume everyone knows about dog mode.”

Others argued that the woman is indeed a Karen because she refused to believe the owner when they told her they had dog mode turned on. When dog mode on a Tesla is turned on, a note on the screen aims to notify passerby as such so that their concerns are quelled.

And others argued that if the Husky was uncomfortable in any way, everyone in the vicinity would have known about it due to how vocal the breed is.

The Daily Dot reached out to @kodithek9 via TikTok DM regarding the video.