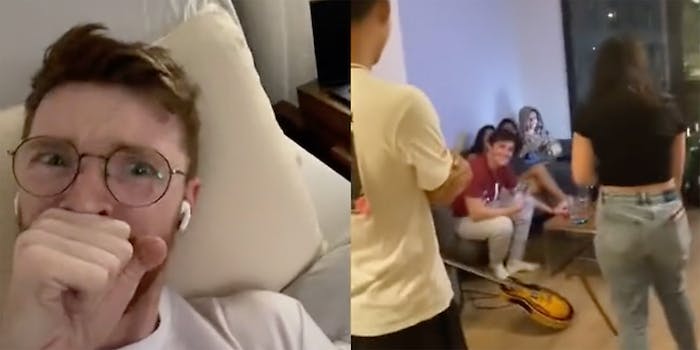 ‘I’ve never seen someone look so unhappy to see their girlfriend’: TikToker surprises her boyfriend at college—and viewers call out red flags

'I can feel the awkward tension.'

A TikTok of a young woman surprising her boyfriend at college has viewers weighing in on what they’re calling red flags in the relationship.

User @laurenzarras posted what she says was a “special moment” when she surprised her long-distance boyfriend, Robbie, at college.

In the video, another friend leads her into a room where Robbie is sitting on the couch with three other women. Uplifting music playing over the video makes it hard to know if anything was said, but Robbie stares in some sort of shock before ultimately getting up to give his girlfriend a hug, while everyone else hanging out in the room laughs and stands around.

The clip has racked up nearly 15 million views as people weigh in on what they feel they’ve gleaned about Lauren and Robbie’s relationship from those 19 seconds.

“I’ve never seen someone look so unhappy to see their girlfriend,” wrote @audiosomal.

“I can FEEL THE AWKWARD TENSION!” added @nicknatpatty. “Homegirls on the couch are literally laughing.”

Another viewer suggested that body language was giving everything away, and that “even his friends’ faces were ready for him to get caught.”

The video has even inspired a number of duets and stitches, with other TikTokers calling out the video as awkward.

But another TikToker says the judgment of the video is problematic, pointing specifically to the constant stream of criticisms aimed at Robbie for sitting on a couch with other women.

“If a man doesn’t have any female friends, I’m going to assume it’s because either, one, he makes women uncomfortable and they don’t want to be his friends, or two, he only views women as sexual objects,” @lizmjohns said. “Why is that something you would want in a partner?”

As for Lauren, she doesn’t seem at all concerned about the state of her relationship, even if she is tired of battling the negative comments on the video.

“Breaks my heart that people can watch a special moment and bring so much negativity,” she wrote after the video went viral. “Please think before you assume anything about my relationship.”

In a follow-up video, she added that she and Robbie had been dating long-distance for a year and are still “literally obsessed with each other” and in contact constantly throughout the day.

The Daily Dot has reached out to Lauren via TikTok comment.